Searching for rare decays: molybdenum-based crystals being tested at the Modane Underground Laboratory 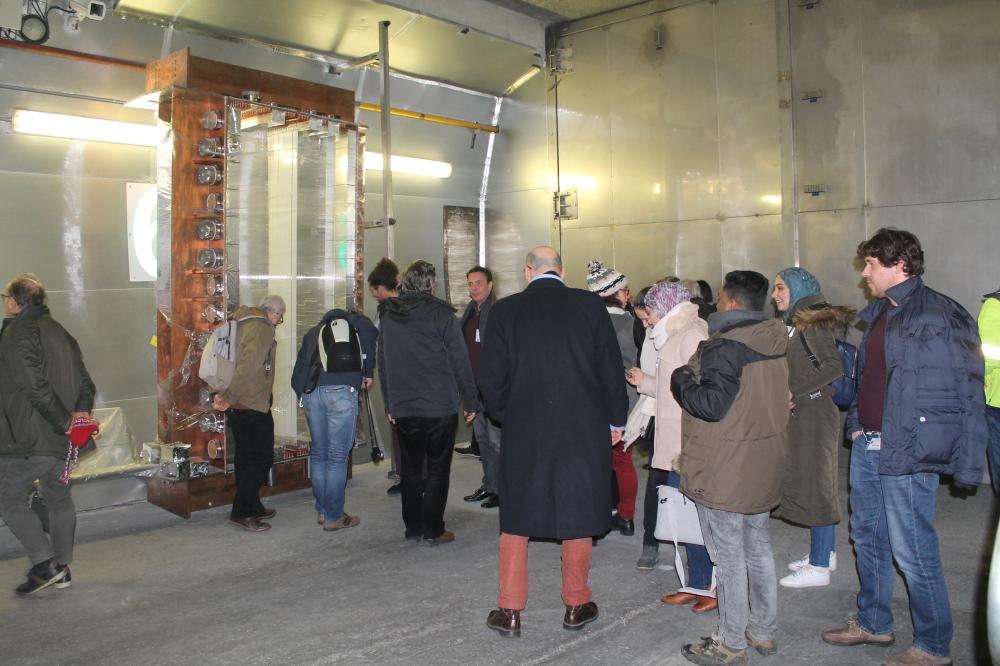 The international CUPID-Mo experiment conducted by French laboratories of IN2P3, CEA/IRFU and CEA/IRAMIS has been testing the use of Molybdenum-based crystals since last April to detect double beta decay without neutrino emission. The experiment is gradually gaining strength and already shows a near-zero background in the region of interest, which is very promising. The scientists of the collaboration made an update in the occasion of the official inauguration on 11 and 12 December 2019.

Double beta decay without neutrino emission is a kind of holy grail pursued by physicists for 80 years. If this decay predicted by certain theories is observed, then it would give, among other things, valuable and much sought-after information about the nature and mass of neutrinos. However, since the time that physicists have been looking for it, this decay has remained untraceable. This is why a new generation of detectors is being developed. One of them, proposed by the CUPID-Mo collaboration led by Andrea Giuliani of IJCLab, with laboratories from IN2P3 and CEA, consists of using bolometer-type detectors based on scintillating crystals containing Molybdenum 100. 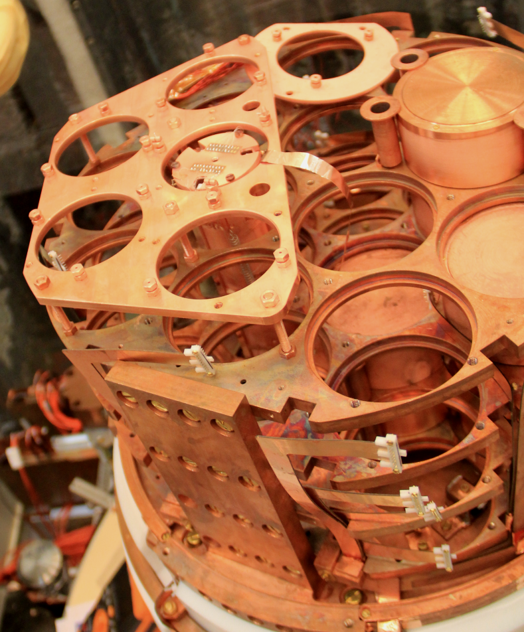 The CUPID-Mo scintillating bolometer array installed inside the EDELWEISS set-up.

This radioactive element produces double beta decays in an energy region less affected by radioactive background, and is enclosed in very pure and transparent crystals. This last property thus adds the possibility of detecting particle emissions or passages in the crystal in two different ways, both by the infinitesimal heating of the crystal (bolometer principle) and by the emission of light. It will thus be easier to identify double decays in the crystal and especially to reject the main source of the radioactive background induced by alpha particles coming from contaminants close to the surface of the detectors. The technology has been tested since last April in the facilities of the Modane Underground Laboratory (LSM) and the members of the CUPID-Mo collaboration took advantage of its official inauguration on December 11 and 12 to take stock of progress.

A background close to zero

A publication at 0.54 kg x year [1] already suggested that the background level would be zero at the energy of the double beta decay. The new results at 1.4 kgxyear presented at the inauguration suggest that this will be the case. But to learn more about the beta double decay energy range, we will have to wait until the experiment stops in March 2020 and exceed 2 kg x year, which should also ultimately provide the best result in the world for beta double decay without neutrinos in Mo-100.  Eventually, CUPID-Mo will be implemented on a large scale in the CUPID collaboration, with 1500 crystals installed at the Gran Sasso Laboratory in Italy.

About the CUPID-Mo experiment: the development of the technology was carried out by the CSNSM laboratory, in collaboration with the CEA/IRFU (ANR LUMINEU, 2012-2017). The detectors were assembled in a clean room at the LAL (which did the mechanics in collaboration with CEA SPEC). The cryostat, electronics and DAQ are the same as those of the EDELWEISS experiment, which cohabits with CUPID-Mo in the same cryostat at the LSM. The optimization of the data collection is ensured by IP2I Lyon and CEA/IRFU (technical coordinator). Analysis is carried out by UCB Berkeley, CSNSM and INFN Rome/Milan Bicocca. The crystals are synthesized in Russia, and the enriched molybdenum was supplied by the ITEP laboratory in Moscow. The temperature sensors are American and the know-how on radiopure crystals comes from Ukraine.

New published by the IN2P3 (in French): https://in2p3.cnrs.fr/fr/cnrsinfo/recherche-de-desintegrations-rares-les-cristaux-base-de-molybdene-lessai-au-laboratoire