Where did the antimatter go? Neutrinos shed promising new light.

The parameter ?_CP can be considered as an angle that translates the degree of asymmetry between matter and antimatter.
If it is 0 or 180°, there is no asymmetry. The maximum asymmetry is when this parameter is -90 or +90°. The results shown here give the best estimation to date for this parameter. For the first time, they exclude almost half of the possible values with a 99.7% (3?) confidence level (grey area). The values 0º and 180º are excluded at 95% confidence level, which may indicate that the CP symmetry is violated in neutrino oscillations. The arrow shows the value that is the most compatible with the data: it is close to 90°, ie maximum asymmetry.
© T2K Collaboration

We live in a world of matter – because matter overtook antimatter, though they were both created in equal amounts by the Big Bang when our universe began. As featured on the cover of Nature on 16 April 2020, neutrinos and the associated antimatter particles, antineutrinos, are reported to have a high likelihood of differing behaviour that offers a promising path to explaining the asymmetry between matter and antimatter. These observations may explain this mysterious antimatter disappearance. They come from the T2K experiment conducted in Japan and in which three French laboratories are involved, affiliated with the CNRS, the École Polytechnique - Institut Polytechnique de Paris, the Sorbonne Université and the CEA.

For decades, scientists have detected symmetry violations between quarks (components of atoms) and their antiparticles. However, this violation is not large enough to explain the disappearance of antimatter in the universe. Another path looks promising: asymmetry between the behaviour of neutrinos and antineutrinos could fill in a large part of the missing answer. This is what the T2K2 experiment is researching. It is located in Japan; its French collaborators are the Laboratoire Leprince-Ringuet (CNRS/École Polytechnique – Institut Polytechnique de Paris), the Laboratoire de Physique Nucléaire and des Hautes Energies (CNRS/Sorbonne Université) and the CEA's Institut de Recherche sur les Lois Fondamentales de l'Univers. 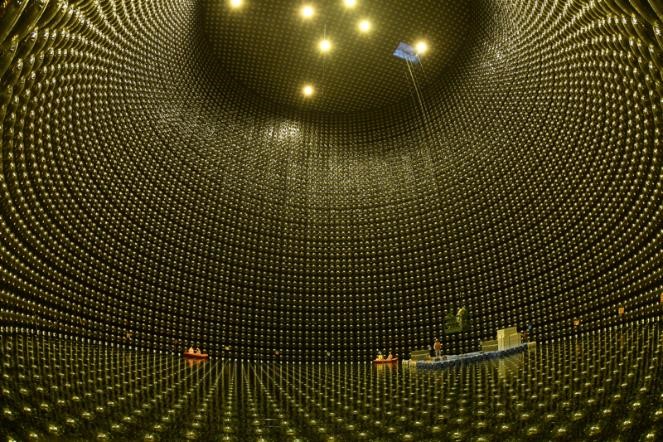 The Super-Kamiokande detector is a tank 40 metres high and 40 metres in diameter, filled with 50,000 tonnes of ultra-pure water, and carpeted with 13,000 detectors.
For its successor Hyper-K, the tank will be larger (Paris’s Notre Dame Cathedral could fit inside it) and have more sensitive detectors. The neutrino beams will also be more powerful.

Neutrinos are extremely light elementary particles. They pass through materials, are very difficult to detect, and are even harder to study precisely. Three kinds of neutrinos – or flavours – exist: the electron, muon and tau neutrinos. The behaviour that could differ for neutrinos and antineutrinos is oscillation, the capacity of these particles to change flavour as they propagate3.

The T2K experiment uses alternating beams of muon neutrinos and muon antineutrinos, produced by a particle accelerator at the J-PARC research centre, on Japan’s east coast. Towards its west coast, a small fraction of the neutrino (or antineutrino) beams sent by J-PARC are detected using the light pattern that they leave in the 50,000 tonnes of water in the Super-Kamiokande detector, set up 1,000 metres deep in a former mine. During their 295 km journey through rock (taking a fraction of a second at the speed of light), some of the muon neutrinos (or antineutrinos) oscillated and took on another flavour, becoming electron neutrinos.

By counting the number of particles that reached Super-Kamiokande with a different flavour than the one they were produced with at J-PARC, the T2K collaboration has shown that neutrinos seem to oscillate more often than antineutrinos. The data even point to almost maximum asymmetry between how neutrinos and antineutrinos behave.

These results, the fruit of ten years of data accumulated in the Super-Kamiokande with a total of 90 electronic neutrinos and 15 electronic antineutrinos detected, are not yet statistically large enough to qualify this as a discovery; however it is a strong indication and an important step. The T2K experiment will now continue with higher sensitivity. A new generation of experiments should multiply data production in the coming years: Hyper-K, the successor to the Super-Kamiokande in Japan, whose construction has just been started, and Dune, being built in the USA, ought to be operational around 2027-2028. If their new data confirm the preliminary results from T2K, ten years from now neutrinos could provide the answer to why antimatter disappeared in our universe.

1 When particles and antiparticles are exchanged, and we consider the experiment obtained by reflection in a mirror and the results are not the same, that is a violation of CP symmetry.

2 T2K represents Tokai-to-Kamioka. Tokai and Kamioka are the two Japanese towns that each house one part of the experiment.

3 This was first observed in the Super-Kamiokande in 2013.