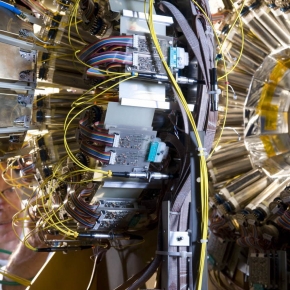 Thanks to the GANIL accelerated heavy ion collisions and the detection of reaction products with the INDRA detector, it was possible to deduce the evolution parameters of chemical elements in stellar phenomena.

These chemical elements, light nuclei (d, t, 3He, α, 6He…), are created by aggregation of protons and neutrons during the collision between the projectile nucleus and the target nucleus. The measurement with INDRA has shown that their production rate is higher than the rate expected by the ideal gas model. The work of the INDRA collaboration, with the help of three theorists, consisted in performing a Bayesian analysis on the data to extract the thermodynamic observables taking into account the effects of the nuclear matter environment and then comparing the data thus obtained with a model.
This result is important since it measures the chemical concentration of aggregates in areas of low nuclear density, the same densities found in nuclear collapse supernovae. The process of this stellar event is largely dominated by the emission of neutrinos that can be captured by free neutrons or present in the aggregates. Thus the chemical concentration of these elements determines the neutrino transport and thus the evolution of the supernova. 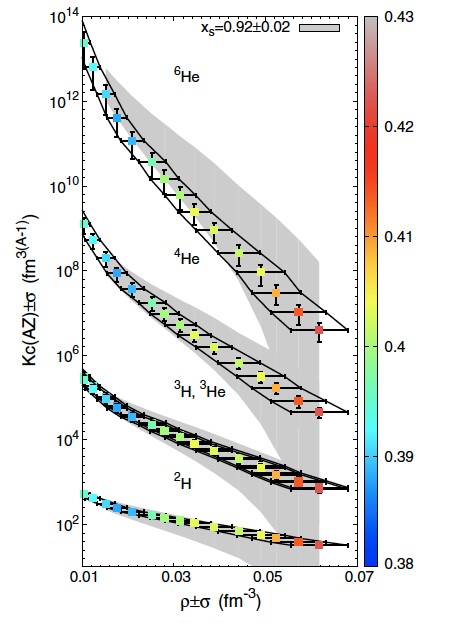 The figure shows the chemical equilibrium constants as a function of density for six light nuclei, the symbols represent the result of the analysis of the INDRA data and show the effects of the environment in the aggregation of neutrons and protons. The shaded bands show a theoretical calculation. The colored scale on the right gives the fraction of free protons in the nuclear material determined in the analysis. The uncertainties on the measured points are represented by the horizontal and vertical bars. These uncertainties are large. Therefore, the next experiments with the FAZIA detector coupled to INDRA have as objectives to increase the accuracy and to extend the measurement to heavier elements.