INCL, a key to deciphering the history of meteorites

Meteorites are bombarded throughout their journey by cosmic radiation. This cosmic ray exposure (CRE) is a formidable footprint of their history, provided of course that we know how to decipher it. The interaction of cosmic radiation with the atomic nuclei constituting the meteorite will produce so-called cosmogenic isotopes, very often radioactive. Measurements of activities, once the meteorite is found on earth, associated with a model can allow us to go back to its pre-atmospheric size, its CRE ages, its terrestrial age, and even to better understand this cosmic ray flux. This type of model is based on a key ingredient: the elementary cross sections of isotope production. For the first time, these have been provided only by the INCL nuclear reaction code developed at Irfu in the framework of a study of iron meteorites [1], thus increasing the precision of the analyses.

Model for deciphering the history of meteorites

Meteorites are parts or remnants of asteroids and ejected from them during collisions. Within the asteroid, the meteorite is shielded from cosmic radiation, but once ejected, it undergoes it throughout its journey until its falling on Earth, where air, water or ice, depending on where it falls, will again shield it from radiation. This irradiation will produce a number of isotopes, the quantities of which depend on many parameters, such as the pre-atmospheric radius of the meteorite, the concentration of elements at the origin of the isotope, the flux (φ) of cosmic rays, and the probability that these two interact to form an isotope. This probability is called the production cross section (σ).

In order to get the most out of the information on the history of meteorites, it is necessary to be able to measure sometimes tiny quantities of isotopes, requiring delicate sample preparation and fine measurements. The fluxes (φ) are taken from our knowledge of the spectrum of the measured cosmic rays, but also from calculation codes. Indeed, these particles are, on the one hand, slowed down in the meteorite and, on the other hand, produce secondary particles, mainly neutrons, which in turn generate cosmogenic nuclei. In the same way, the production cross sections (σ) have long been extracted from experimental measurements. Unfortunately, these have shortcomings. Interpolations and extrapolations [2] have to be systematized to cover the whole energy spectrum. At the same time, in recent years, the quality of nuclear reaction codes has greatly improved, allowing them to provide reliable σ at any point of the spectrum. This is illustrated in a recent study [2], demonstrating the usefulness of nuclear reaction codes in the study of meteorites.

Compared to the other meteorites, the so-called iron meteorites present two interesting isotopes to take into account, 53Mn and 60Fe. These two isotopes have definite advantages. First of all, having longer lifetimes than most other isotopes, they are less affected by terrestrial residence. In addition, they have simple production mechanisms because the latter are few in number. Thus, the uncertainties associated with the models are lower. Finally, new experimental techniques (chemical separation procedure and mass spectrometry (AMS) measurements [1]) make it possible to overcome experimental difficulties (contamination, low presence, etc.) and to measure their concentration.

As mentioned above, much information is contained in the production rates of cosmogenic isotopes. Their studies make it possible to trace the characteristics of meteorites (size...), but also to deduce the phenomena to which they were exposed (collisions...).

Among the necessary ingredients, the production cross sections of the cosmogenic nuclei remained tainted at times by large uncertainties due for example to inconsistencies between different sets of data, partial energy coverage, or gaps in secondary particles.  Some nuclear reaction codes can finally compensate for these defects, thanks to the significant improvements made in recent years. For this reason, the study presented here has been done by replacing extrapolations and interpolations of σ experimental data by the computational results of the INCL code, recognized as one of the best to simulate the production of nuclei when associated with the Abla de-excitation code (see FM of January 30, 2013). Fig. 1 gives an example of the simulation quality of the 53Mn production from the interaction of a proton on Ni, but also the smoothness over the whole energy range contrary to the experimental data.

The 53Mn activity measurement was performed on 46 samples. Comparisons with the calculated activities are very encouraging. Thus, only eight samples show activities higher than the calculated ones for commonly accepted meteorite sizes. Among the others, the fine example of the Grant meteorite is worth mentioning. Where the latest experimental results [1] indicate an activity of 441±45 disintegrations per minute and per kilogram (dpm kg-1), the model using INCL gives a value in perfect agreement, between 331 and 478 dpm kg-1 for a radius of about 40cm.
On the other hand, in the particular case of this meteorite, the measured and calculated activities of 60Fe seem to point to a size greater than 1m, which is not possible since all studies, including ours with the 53Mn, contribute to a radius of about 40cm. An explanation is perhaps to be sought on the side of the elementary cross sections of 60Fe production.  Indeed, INCL predicts a preponderance of the n+Ni --> 60Fe channel, which cannot be tested for lack of data. An overestimation of the latter could explain the model/data difference. To evaluate it, Bayesian inference techniques allowing to combine different sources of information (experiments, models) to increase knowledge should be implemented in the future.

Correlations between the specific activities of two isotopes can be used to test the consistency of the results and, if not, to make hypotheses to explain behaviors not predicted by the model. For example, the activity of 53Mn as a function of that of 36Cl helps us to understand the CRE history.

Fig. 2 shows this correlation. If in 25 cases the calculations and measurements are consistent, 10 cases deserve an explanation. For example, there are five meteorites (Casas Grandes, Sikhote-Alin, Calico Rock, Schwetz, and Trenton) for which the individual measurements of 36Cl [4] and 53Mn [1] correspond to values calculated for the most common sizes, but for which the correlations are outside the model predictions. Findings from other 36Cl studies suggest that it is the 53Mn activity that is abnormally high. There are two possible explanations: either problems occurred during sample preparation and/or AMS measurements, or the CRE history is complex. Usually, it is assumed that the meteorite is exposed to cosmic radiation continuously between its ejection from the asteroid and its fall to Earth. However, the meteorite may also be subject to one or more collisions, making it very difficult to analyze the link between the activities of different isotopes. The loss of matter thus exposes deeper layers, modifying production rates and correlations. If this explanation is acceptable for some meteorites, unfortunately, it does not hold, for example, for the Calico Rock meteorite, because of a too high 53Mn activity. In this case, INCL allows us to conclude that there is a problem with the measurement of the sample. 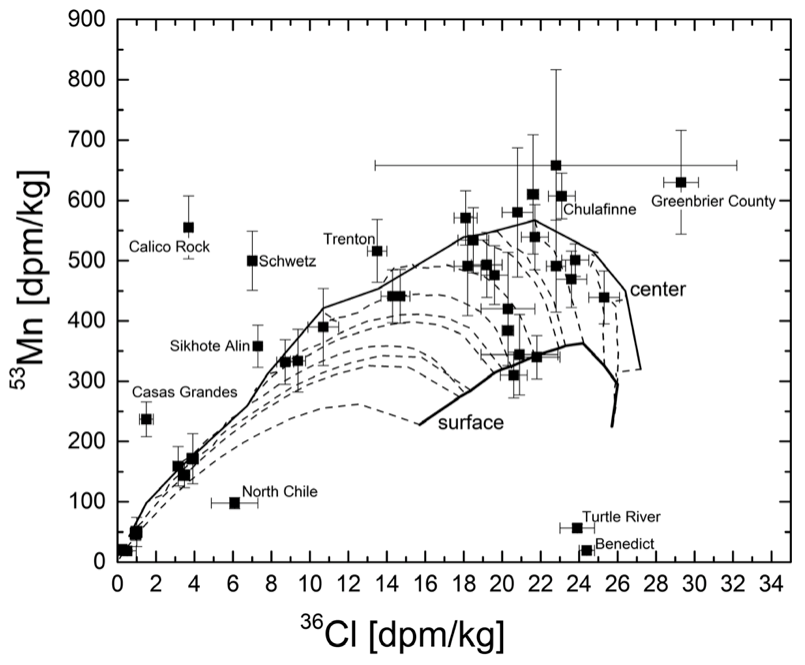 Figure 2: Production rates of 53Mn as a function of 36Cl production rates for all shielding depths in iron meteorites with pre-atmospheric radii between 5 cm and 120 cm and the outermost 2 m of a 10 m object. The thin dotted lines connect the model calculations for an individual meteorite (from the surface toward the center). The thick black lines connect the results for all surfaces and centers, respectively. The model predictions define an area of allowed 36Cl-53Mn production rate combinations. Also shown are experimental data. Meteorites plotting outside the allowed field are labeled. Original figure from [1].

The production mechanisms and lifetimes of the 53Mn and 60Fe isotopes are precious observables for deciphering the history of iron meteorites. Improvements in sample preparation techniques and mass spectrometry measurements, on the one hand, and in the simulation of nuclear reactions using the INCL code, combined to the Abla code, on the other hand, have made it possible to use these two isotopes in a recent study [1]. Computation/measurement comparisons have made it possible to show the reliability of the modeling, to study certain characteristics such as the sizes of the meteorites of Grant (40cm) and Twannberg (up to 10m). They also allow to progress on the history of some meteorites, by suggesting collision scenarios, and finally to make critical analyses on the methods used in the study, pointing in particular at suspicious samples. In the future, the envisaged improvements of INCL should make it possible to better reconstruct the individual histories of meteorites, beyond iron meteorites alone.