In search of gravitational wave signatures

In 2016, the announcement of the first direct detection of gravitational waves opened a new window of observation to probe our universe in a new way. The LISA (Laser Interferometer Space Antenna) space observatory promoted by ESA (European Space Agency) will allow the direct detection of gravitational waves undetectable by terrestrial interferometers. Its launch is planned by ESA in 2034 and many current works are exploring its scientific potential, in particular through the LISA Data Challenges aimed at exploiting realistic pseudo-data. Researchers from DEDIP and DPHN at IRFU have recently developed new methods for the detection of gravitational waves inspired by similar problems in image processing applied to astrophysics. These methods were successfully used in the last LISA Data Challenge.  This work, published in the journal Physical Review D [1], opens the way to many other studies and is the result of a transverse approach combining physics and signal processing.

This giant space interferometer consists of three satellites forming 2.5 million-kilometer arms (Fig. 1). It will be put into orbit at about 50 million kilometers from the Earth. Unlike ground-based observatories, which are sensitive to rare gravitational wave signals and subject to a dominant measurement noise, this space interferometer will continuously receive a large number of distinct signals that are theoretically characterized to varying degrees of accuracy. It is currently estimated that, among the various sources of gravitational waves, there are 60 million continuously emitting galactic binary systems and 10 to 100 annual signals from supermassive black holes.

One of the scientific objectives of LISA is the study of the formation and evolution of galactic binary systems: white dwarfs, but also neutron stars or black holes of stellar origin. About twenty so-called "verification" binary systems are already identified as sources of gravitational waves detectable by LISA, which should however allow the characterization of more than 10,000 galactic binary systems. The many other unresolved systems will form a stochastic background, or confusion noise. In addition, as in any experiment, the actual data will be subjected to a number of noises and artifacts that must be taken into account to optimize the scientific potential of the mission. The analysis of the LISA mission data therefore involves many challenges, including the multitude of sources and types of sources to be identified, the complexity of instrumental noise, as well as the incomplete nature of the data due to periods of signal acquisition interruption (e.g. for maintenance). 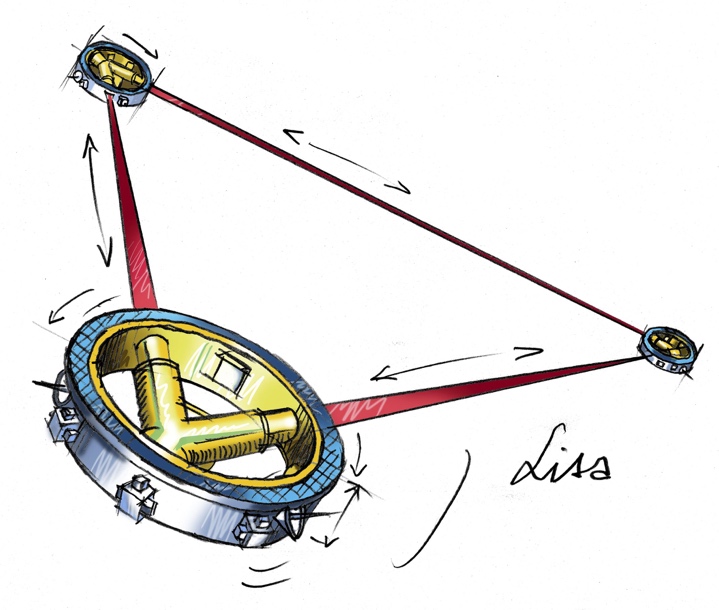 Figure 1: The LISA space observatory, made up of three satellites constituting three interferometers. 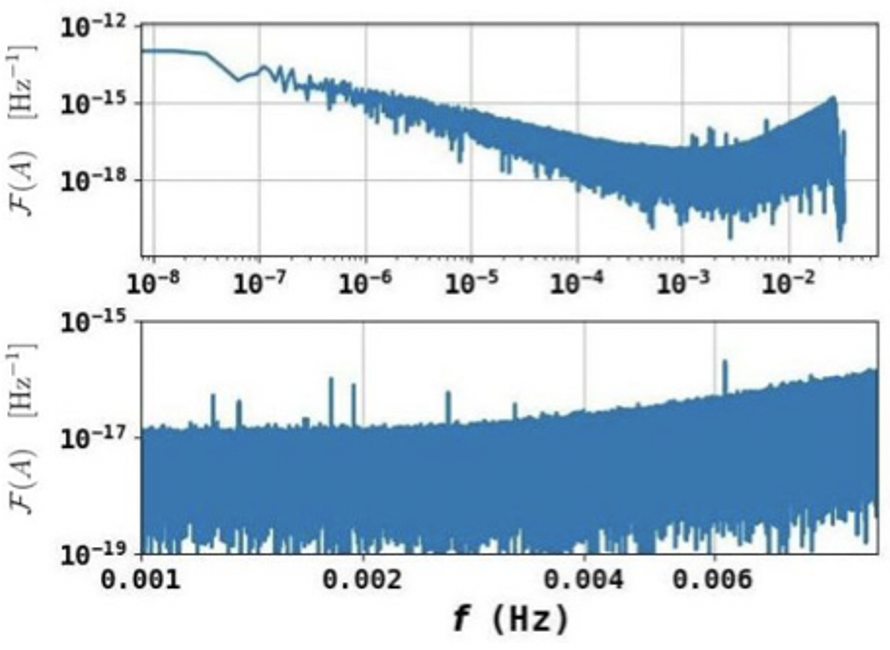 Figure 2: Prediction of measured signal amplitude A at frequency f. About ten signals from binary verification systems are separated from the instrumental noise. Top: complete observation window. Bottom: zoom on the part of the signal containing the emission peaks due to the galactic binary systems simulated in the pseudo-data.

The common thread running through the LISA data analysis work carried out at IRFU is a demonstration of the scientific and technical capacity to process real data in a reliable and robust manner. Galactic binary systems provide an excellent testing ground. This type of signal is measurable on LISA, and its shape is well known from a theoretical point of view. Nevertheless, extracting information of astrophysical interest from these signals is a challenge, especially since the signal sought can be buried in instrumental noise (Fig. 2).

Researchers from DEDIP and DPHN have developed new methods inspired by similar problems in image processing applied to astrophysics. These methods are based on sparse signal modeling, which exploits morphological differences between signals of physical interest and instrumental noise. In particular, the galactic binary systems that will be studied by LISA emit quasi-periodic waves and leave in the measured signal a very different imprint on the structure of the noise, which is of a random nature. The sparsity lies in the fact that as few quasi-periodic sources are sought as necessary to interpret the measured data. These methods have the double advantage of robustness and the low number of hypotheses on the shape of the gravitational waves to be detected, and have allowed us to successfully meet the latest LISA Data Challenge (Fig. 3). They are the subject of a paper published in Phys. Rev D [1]. The associated code is freely distributed under the GPL license on GitHub [2] in an effort to promote open science and the reproducibility of scientific studies.

Figure 3: Prediction of the measured signal amplitude E represented as a function of its dependence on frequency f (left) and time t (right). The time signal is expressed in Doppler shifts (useful for interferometric measurements with variable arm lengths). The figures on the second line correspond to zooms on those on the first line. The reconstructed sparse signal (in red) is in very good agreement with the desired signal (in green). All verification binaries have been identified, and no noise structure has been wrongly identified as a physical signal.

This first study makes the case for a sparse approach to the processing of LISA data, an approach that complements the range of existing techniques. The latter are mainly based on the determination of all the physical parameters describing all the sources searched for through the prism of a supposedly perfectly known waveform. The sparse analysis, for example, provides less information on the position of the sources in the sky but is faster. It also lends itself easily to the treatment of problems that are still open, such as the management of interruption periods in data acquisition. Finally, it is robust because it efficiently separates the signal from the instrumental noise under very weak assumptions about the shape of the signal.  This form is most often based on a number of assumptions and depending on the state of the art, the most accurate form of the signal may evolve over time. This robustness with respect to the unknown signal is particularly relevant to preserve the discovery potential of the mission: as the first observatory of its kind, LISA must be able to detect completely unexpected signals.

The prospects offered by this work include further evaluation of data analysis methods with the participation in the LISA Data Challenges and the development of tools adapted to modeling increasing data complexity (e.g. optimization of data collection interruption periods for maintenance, consideration of realistic noise, analysis of events of a more varied nature beyond galactic binaries, approaches by disentangling different events, etc.).