4D visualisation of a proton radioactivity with ACTAR TPC

An experiment performed at GANIL with the new detection device ACTAR TPC (ACTive TARget Time Projection Chamber) allowed for the development of a new technique for the direct reconstruction of the 3D trajectories of the protons emitted by the isomeric state of 54mNi nucleus and simultaneously visualize their decay time (the 4th dimension). This observation is an unprecedented test of theoretical models since it probes some extremely weak components of the wave functions describing the structure of this nucleus. This technique is already foreseen to be used for the measurement of other similar decays. The result of this experiment was recently published in Nature Communications1.

Proton radioactivity of the isomeric state in 54Ni

The proton emission radioactive decay mode has been known for 50 years. This process contributed to the characterization of the limits of the table of isotopes (the so-called drip-lines). In the case of 54Ni, the emission occurs from an isomeric state (with spin and parity 10+): this is a special state being metastable. The decay of this state can be compared to an equivalent state in the 54Fe nucleus, that is more stable and better known. 54Ni and 54Fe are called “mirror” nuclei as they are composed from inverted numbers of neutrons and protons, and thus have very similar properties because of the isospin symmetry, stating that protons and neutrons are equivalent particles (except for the electric charge). From a theoretical point of view, the nuclear shell model describes very accurately the 10+ state in 54Fe, but not in 54Ni, because of the proton emission that could not be observed with usual detection techniques.

The complete observation of the proton emissions reported in this article allowed to show, on a theoretical basis, that the process is sensitive to extremely weak components of the wave functions describing this state. 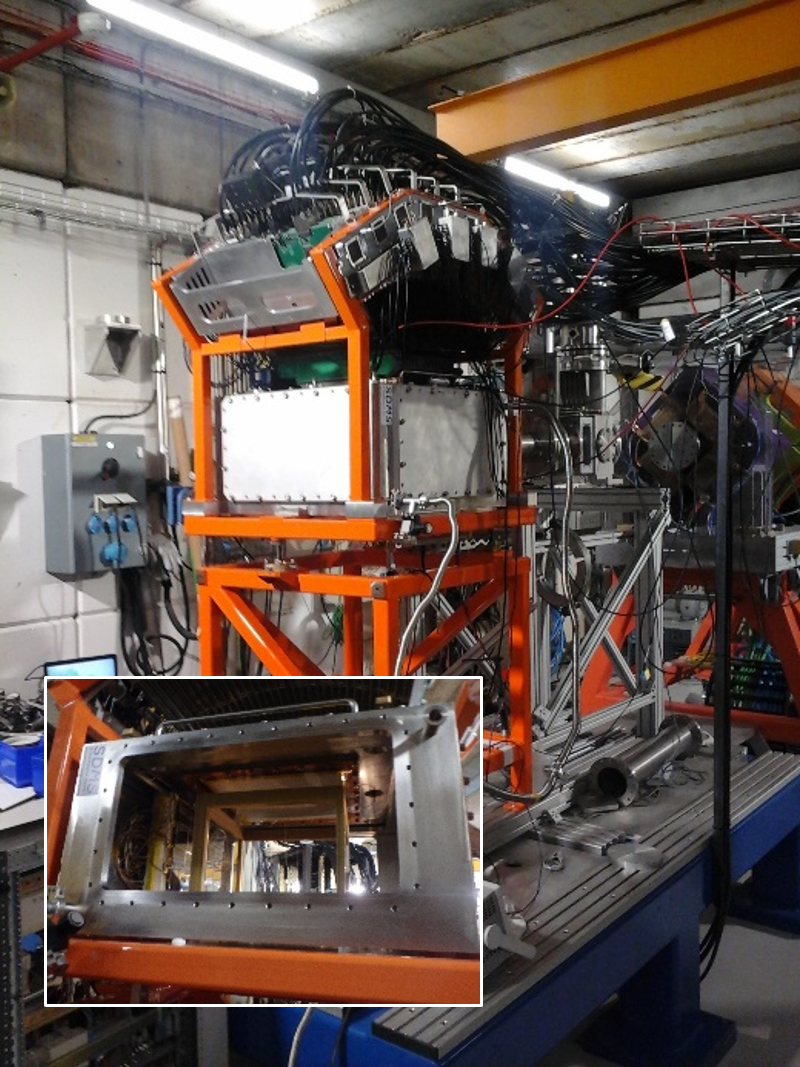 Figure 1. ACTAR TPC device installed at the end of the LISE3 beam line at GANIL. The insert shows the interior of the device, with the cage generating the electric field for the drift of the ionization signal towards the collection plane.

In order to observe this proton emission, it required the use of a recently developed device for nuclear physics: ACTAR TPC2. It is a gaseous detector based on the principle of a time projection chamber. When charged particles – the emitted protons in this case – travel across the gas volume, an ionization signal is created along the trajectories. This signal is “projected” and measured on a 2D pixel matrix (the collection plane), and with the drift time on each pixel, the trajectory is reconstructed in 3 dimensions.

This device has been installed on the LISE3 beam line at GANIL (Figure 1) where the 54Ni (unstable) ions were produced by bombarding a beryllium target with a (stable) 58Ni beam. The violent collisions produce many different types of nuclei, among which 54Ni that is selected using the LISE3 spectrometer (an ensemble of magnetic and electric elements) and implanted in the gas volume of ACTAR TPC. However, only a small fraction, in the order of 1 per 1000, of the 54Ni nuclei are produced in the isomeric state of interest. From the 2 million identified nuclei, it was possible to reconstruct about 2500 protons originating from two transitions clearly identified.

The 4D observation of emitted protons

The direct observation of the 54Ni isomeric state was not possible with standard detection techniques (using solid silicon diodes) used in this type of experiments. Indeed, when the ion slows down and stops in the detector, it deposits an energy about 1000 times larger than the proton energy. The latter is emitted on average 150 billionth of a second after the implantation, which makes impossible to distinguish the tiny signal of the proton from the signal of the ion. 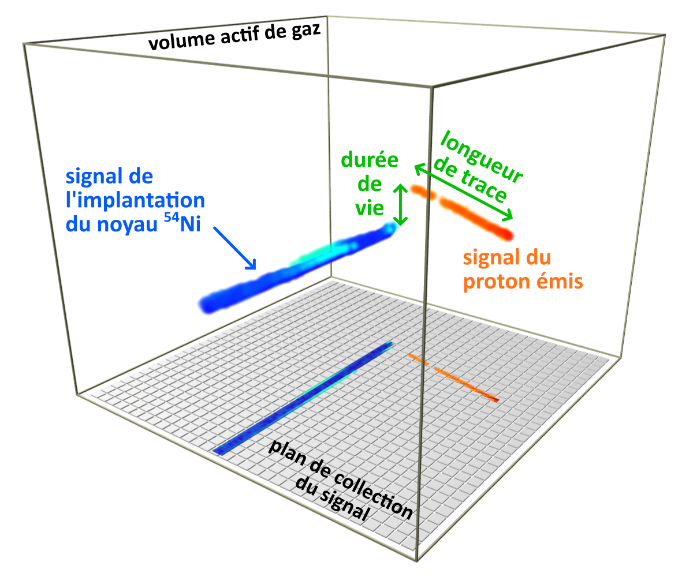 Figure 2. Principle of the reconstruction of the trajectories of the implanted nucleus and the emitted proton. The proton track length (in 3D) is characteristic of its energy. The offset, on the vertical axis (drift axis of the ionization signal towards the collection plane), between the ion stopping point and the beginning of the proton track is a direct measurement of the emission time of the proton (that is used to determine the lifetime of the 54Ni isomeric state).

The problem could be overcome by using ACTAR TPC for the 3D reconstruction of the trajectories: the signal from the protons, emitted in any direction, is measured on different pixels of the collection plane than the ones collecting the ion implantation signal (Figure 2).

Because of the lifetime of the state of interest, the proton is emitted while the ion signal already started to drift towards the collection plane. Therefore, a shift is observed on the vertical axis (the time projection axis) between the ion implantation point and the proton emission point. This shift directly measures the decay time of the isomeric state. This lifetime measurement and the protons track length, directly related to their energy, gives a full picture of the proton radioactivity of this state, and allows for a stringent test of theoretical models.