The remnants of massive star formation in the Tarantula Nebula

Understanding the star formation process is a major open question in contemporary astrophysics. It is indeed the process that controls the evolution of galaxies since their birth, gradually transforming their interstellar gas into stars and enriching it with heavy elements and dust grains. It is also the formation of stars that is at the origin of the formation of planetary systems and the appearance of life. This process is however complex and still very poorly understood. It involves the understanding of a series of hydrodynamic instabilities leading to the collapse of a molecular cloud, in which gravity, magnetic field and chemistry play a central role. Moreover, the feedback, i.e. the ionizing radiation and the wind from newly formed massive stars, has the effect of destroying the rest of the molecular cloud and thus inhibiting star formation after a few million years. This feedback is a key element, but it is still insufficiently understood.

An international team, including two researchers from DAP/LFEMI, has just published a paper in the Astrophysical Journal (Wong et al., 2022, ApJ, 932, 47) shedding new light on the process of stellar feedback. This study focuses on the Tarantula Nebula (also known as 30 Doradus) in the Large Magellanic Cloud. This is the most intense region of massive star formation in the local galaxy group. Indeed, on average, one star is born every three years, in a radius of only 500 light-years around the main star cluster, R136. This team has obtained observations of the molecular gas, with the ALMA millimeter interferometer. The molecules studied are 12CO and its isotopologue1, 13CO. The 12CO molecule is the most studied molecule by astrophysicists, because it is the second most abundant, after H2 which does not have emission lines at low temperature. As for 13CO, it allows to probe the denser regions of molecular clouds.

1An isotopologue is a molecule of which one of the atoms is replaced by its isotope. (source future-sciences.us) 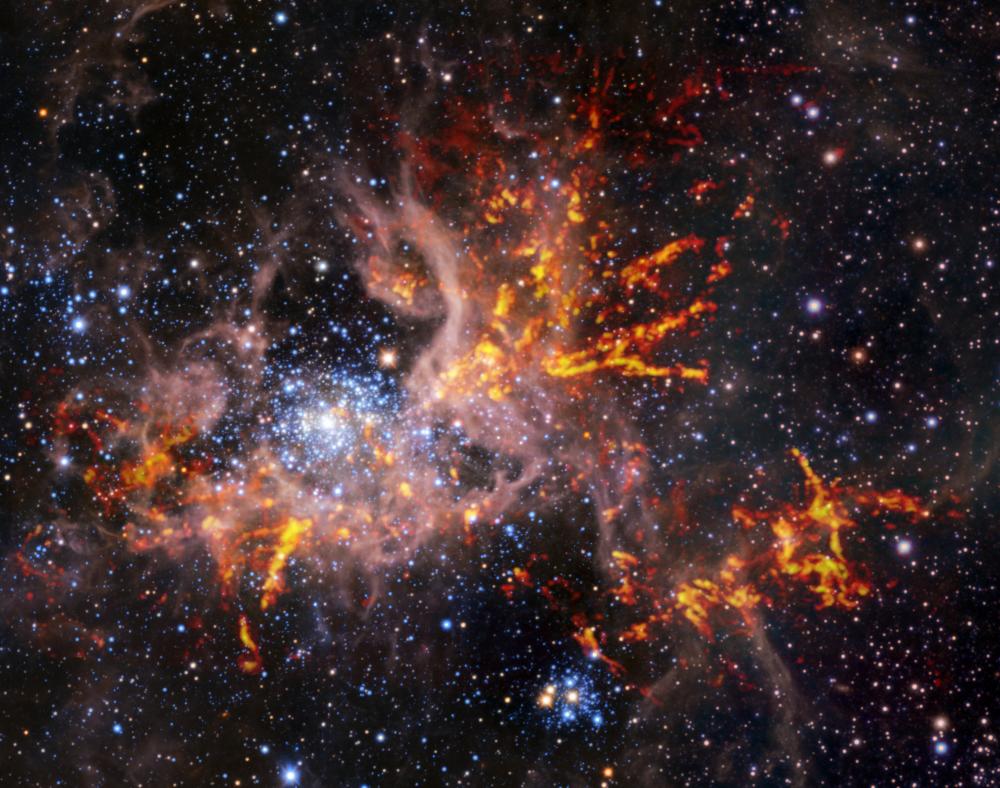 Composite image of the Tarantula Nebula (or 30 Doradus). The stellar emission, seen in blue, is a VLT observation, in the visible range. The pink nebulosities are from VISTA observations, in the near infrared. The yellow and red filaments are millimeter observations of the CO molecule with ALMA. Credit: ESO, ALMA (ESO/NAOJ/NRAO)/Wong et al, ESO/M.-R. Cioni/VISTA Magellanic Cloud survey. Acknowledgment: Cambridge Astronomical Survey Unit. Original file: https://www.eso.org/public/images/eso2209a/. Published under CC-BY-4.0 license.

The obtained observations, exceptional by the extent of the mapped field and by their depth, allowed to show that molecular gas remained in the central region of Tarantula. These clouds have a filamentary structure (image above), similar to what can be observed in the Milky Way (see for example a previous highlight on this subject). The physical conditions of this molecular gas indicate that it is still partially self-gravitating and could therefore continue to form stars, despite the presence of the massive star cluster which should result in an inhospitable environment dominated by high turbulence and low density. It could be that a rapid transient state is observed here before the molecular structures are dispersed and destroyed. These data also revealed the presence of a residual diffuse molecular component that could be the visible part of a dark gas component.