A model for the heart of the nucleon 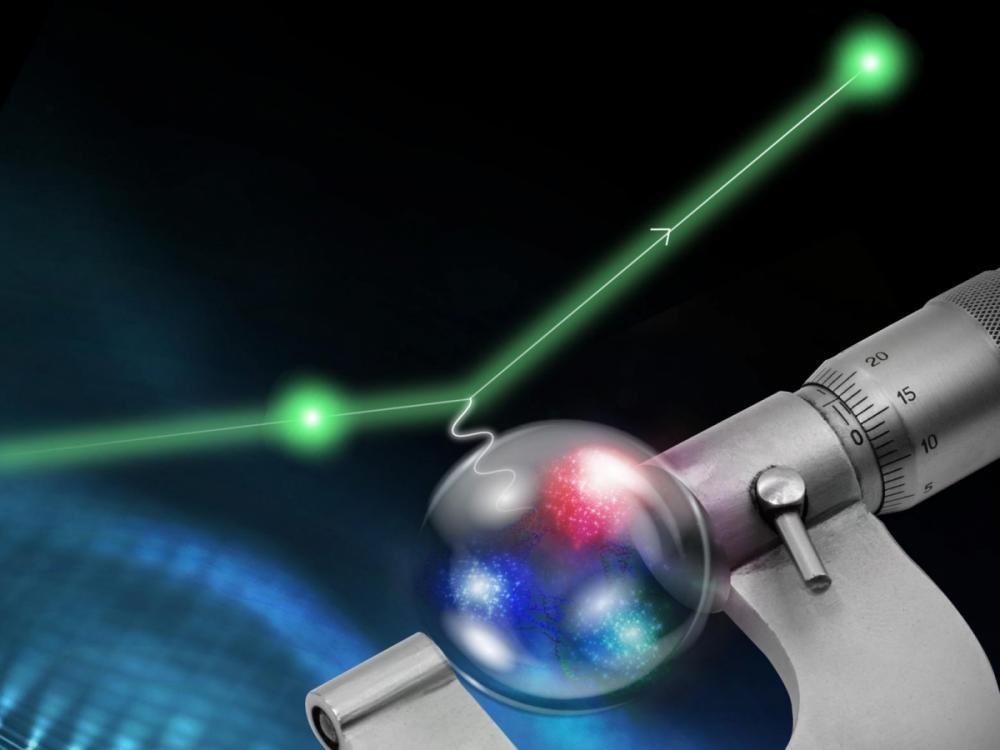 Nucleons (protons or neutrons) are the constituents of the nucleus of atoms. The exploration of their internal structure is traditionally done by determining "form factors". These quantities are accessible through the study of elastic electron-proton scattering and electron-positron annihilation reactions into proton-antiproton (or the time reverse reaction of proton-antiproton annihilation into electron-positron). They define the distribution of charge and magnetic moments inside the nucleon, induced by the quarks and gluons that are present in the nucleon.  Ten years ago, a theoretical model giving an original vision of these distributions was proposed by a collaboration involving a physicist from Irfu [1]. Since then, the accumulation of experimental data has reinforced the validity of this model, which is able to give a picture of the proton and a scenario for the formation of hadronic matter with a spatio-temporal resolution never achieved before. We have access to phenomena on a spatial scale of a hundredth of a femtometer and a temporal scale of the order of 10-25 s, which is 100 times less than the time the light takes to cross a proton. These results are the subject of a recent publication in the journal Physical Review C [2].

Nucleons (proton or neutron) are often described as a compact set of three quarks - called "valence quarks" (the lightest in the family of quarks: uud in the proton, udd in the neutron) surrounded by pairs of quarks-antiquarks (the so-called "sea quarks"). The quarks have a mass, an electric charge and a color, which differentiate them from each other, the nucleon being -like any observable particle- neutral in color. The gluons, mediators of the strong interaction and "transporting" the color, ensure the cohesion of the system by generating a 'dynamic' mass.

What if, at a very small distance, there was a vacuum zone, due to the strong interaction?

This image, proposed in the 1970s, sees the inner region of the proton as an excited quantum vacuum created by a gluon condensate whose spins are randomly oriented [1]. A screening phenomenon of the gluon field would take place - as in a plasma for the electromagnetic field. Becoming colorless, the identical valence quarks (uu in the proton, and dd in the neutron) would no longer be distinguishable, and would tend to move away from each other under the effect of the Pauli principle. The third quark (d in the proton, and u in the neutron) would be attracted by one of these two quarks forming a compact subsystem called 'diquark'. The system would expand, cool down, the valence quarks would absorb gluons, acquiring ipso facto mass and magnetic moment and becoming constituent quarks. 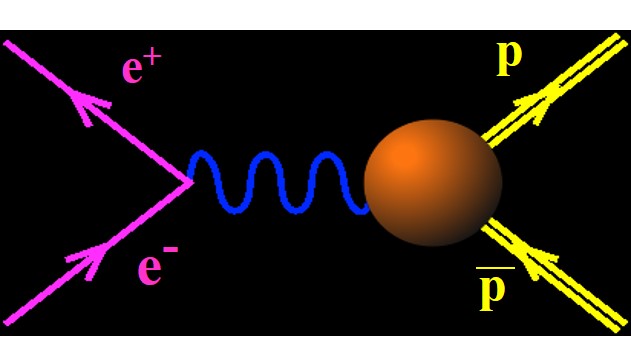 diagram (Feynman diagram) of an electron positron annihilation in a proton-antiproton pair, through a virtual photon (blue).

How can this theory be tested?

This picture is even more striking for annihilation reactions: a beam of electrons collides with a beam of positrons (particles identical to electrons but of positive charge) and produces particle-antiparticle pairs. For the system to evolve towards the final nucleon-antinucleon state, the energy required from the accelerator must be at least 2 GeV, i.e. twice the mass of the nucleon. During the annihilation, this energy is concentrated in a small volume of dimensions hbar/(2M) ≈=0.1 fm whose fluctuations produce quark-antiquark or diquark-antidiquark pairs. This system is subject to extremely intense forces of opposite sign: the strong interactions due to the gluon field and the electromagnetic interaction.

What do the data tell us?

Since the years 2000 when dedicated polarization experiments became accessible, we can measure very precisely the ratio of the electric and magnetic form factors, GE/GM, in the hypothesis that the electron proton interaction occurs through the exchange of a photon [3]. The experimental measurement of this ratio indicates that it is affected by the energy of the beam, as predicted by the model [1], confirming  its capacity to give a good "spatial" image of the nucleon (cf. Figure 1).

From the time point of view, the model has also been reinforced by the discovery of oscillations in the electron-positron→proton-antiproton annihilation cross section [4]. These oscillations become regular and damped, as in an interference phenomenon. Again, the model sheds light on the origin of this phenomenon, which is attributed to the coexistence within the nucleon of a di-quark component and a three-quark component. 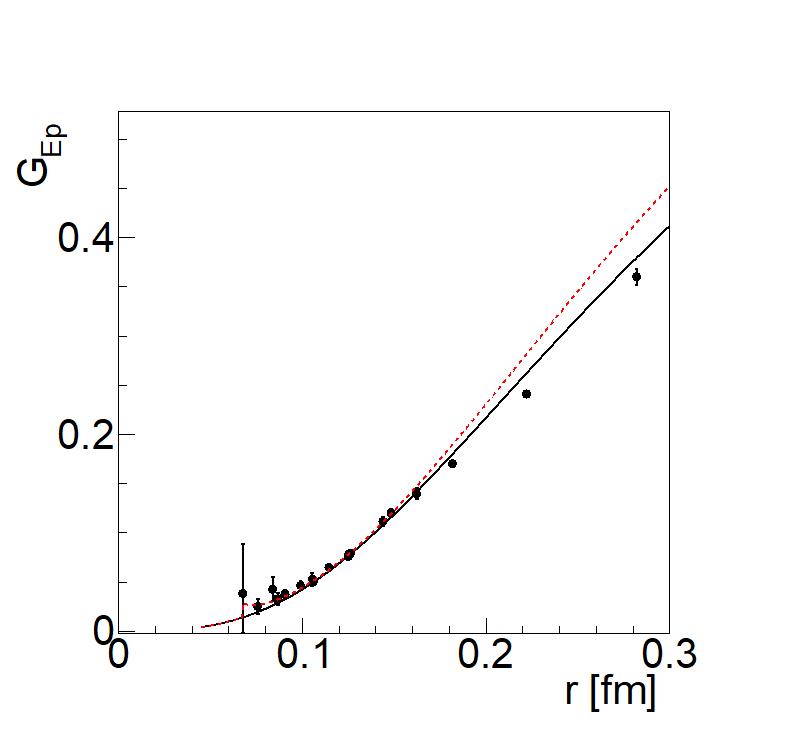 Fig. 1: Electric form factor of the proton as a function of the distance probed by the virtual photon. The solid curve is the model prediction, the dashed red curve is a linear fit to the large momenta (small distance) data [2]. 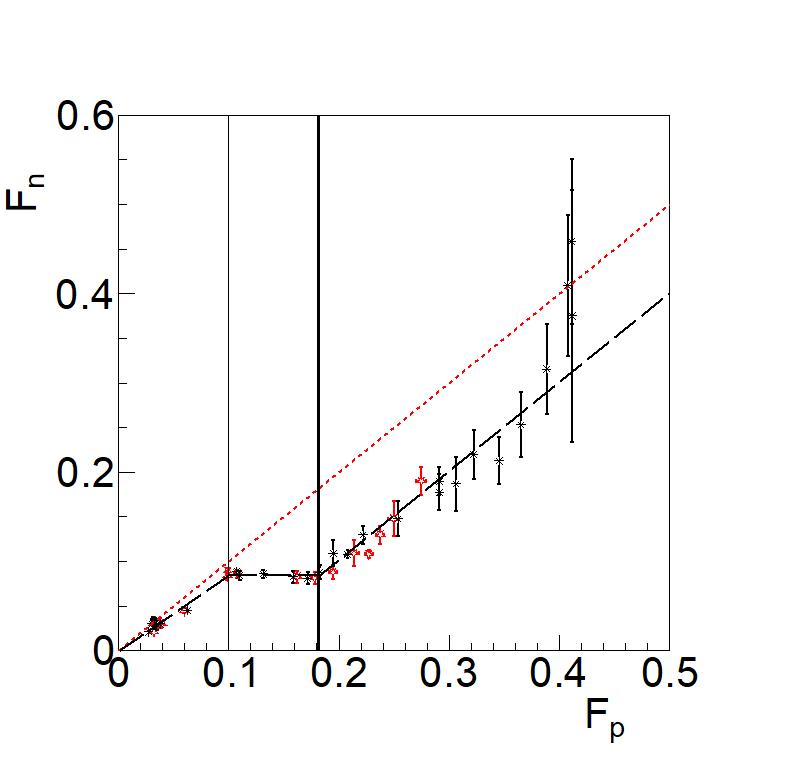 Fig. 2: Correlation of neutron (Fn) and proton (Fp) form factors, given by the red open triangles and the black and red asterisks, respectively. The dashed red curve indicates the bisecting line Fn=Fp. The vertical lines highlight the regions of discontinuity. The black dashed line is a linear fit by regions [2].

The model suggests that the formation of a hadron by annihilation takes place in three distinct phases:

These predictions have been corroborated by measurements [5] reported on figure 2 which plots the neutron form factor against the proton one [2],  showing the correlation between these two form factors. This figure allows us to distinguish three regimes, which can be associated with the three stages of the hadron annihilation and formation process described above.

In conclusion, the comparison of the new data on form factors with the predictions of the theoretical model [1] allows to confirm the latter.

We then propose a precise, original and coherent picture of the nucleon in its spatial dimension but also follow the formation of matter in time since its creation at very small scales of distance and time!