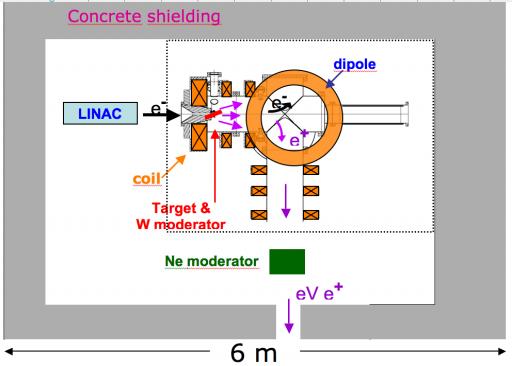 Scheme of the SELMA-SOPHI set surrounded with concrete shielding. SELMA corresponds to the LINAC.

In November 2006, an ASTRE candidature was presented to the "Conseil Général de l’Essonne" and accepted under the name SELMA. This allowed to purchase a small electron linear accelerator based on a magnetron as RF source.

A positron source based on the principle of such a small accelerator of low energy has the advantage not to be classified as a nuclear installation (INB). Such systems indeed exist which are based on nuclear research reactors to produce positrons, as in Garching (Germany) in the FRMII reactor (NEPOMUC) or else with the reactor in TU Delft (Netherlands). More compact than these systems, it could produce a competitive rate of slow positrons depending on the electron intensity.

The energy was measured to be 4.3 MeV with an intensity of 0.13 mA. The positron rate produced with such a machine is ~ 1.5 1010 s-1. The antimatter gravity experiment at CERN will need a more powerful linac. However, the present machine allows testing a large part of the components of this experiment: slow positron production and accumulation in a Penning trap, creation of a positronium traget and excitation of these positroniums.