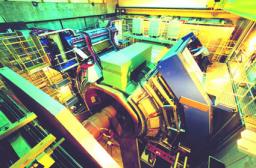 The PHENIX experiment is one of the two large experiments located on the Relativistic Heavy Ion Collider (RHIC) at the Brookhaven National Laboratory (BNL), in Long Island, United States. It aims to study the properties of the nuclear matter under conditions of high pressure and high temperature, such as the conditions achieved during relativistic heavy ion collisions and notably to evidence the formation of a Quark Gluon Plasma (QGP), a state of the nuclear matter in which quarks and gluons are no longer bound into nucleons but can on the contrary travel quasi-freely on distances that are larger than the typical nucleon size.

PHENIX aims to identify and study the possible formation of a quark-gluon plasma in heavy nuclei collisions at a nucleon-nucleon center of mass energy √ sNN = 200 GeV. Many probes are studied using the PHENIX spectrometer to achieve this goal and notably the production of the J/Ψ resonance which is a heavy quarkonia constituted of a charm anti-charm quark pair. The suppression of the J/Ψ production with growing energy density of the medium was long considered as a promising proof of the formation of the quark gluon plasma. A suppression of the J/Ψ production was already observed at a lower energy by the NA50 experiment at the SPS, and for several models that describe these results a larger suppression is expected when increasing the nuclei beam energy.

PHENIX is located in the 8th o'clock point of RHIC at BNL in Long Island, New York.

The PHENIX collaboration regroups about 500 members from 57 institues in 12 countries.

The SPHN joined the PHENIX experiment at the end of the year 2000 together with several groups from the IN2P3, inside the PHENIX-France collaboration. Its original contribution was to finance 25% of the readout electronics of the PHENIX forward rapidity muon spectrometerss, dedicated to the measurement of muons at forward rapidity. Until the end of the year 2010, at which time the SPHN has officially left the collaboration to focus on the ALICE experiment [7], on the Large Hadron Collider (LHC), at CERN, our group has been active in the following fields:

The production of the J/ψ meson has been extensively studied at RHIC, in p + p, d + A and A + A collisions to quantify the effects of the surrounding cold and hot nuclear matter created during heavy ion collisions. The SPHN group has played a crucial role at all steps of these studies over the past 7 years, by contributing to the maintenance of the muon detector at forward rapidity, taking the responsibility of the reconstruction software of the forward rapidity data and of the simulation software at both mid- and forward rapidities, and by actively participating to almost all the J/ψ related analysis performed in PHENIX during this period.
The partial conclusions of these studies are that:

The expertise acquired by the group during its participation to the PHENIX experiment is being fully exploited in our contribution to ALICE.