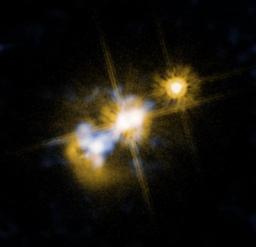 A 'naked' quasar caught in the act
Do quasars give birth to galaxies?
Which came first - the black hole or the galaxy? Many large galaxies in the Universe have a supermassive black hole at their centre. But which came first? The black hole that is frantically consuming the matter around it or the vast galaxy that is its home? A European team led by David Elbaz from CEA-IRFU's  Astrophysics Department has just discovered a spectacular interaction between a quasar and a galaxy from observations made with the VISIR camera.
More