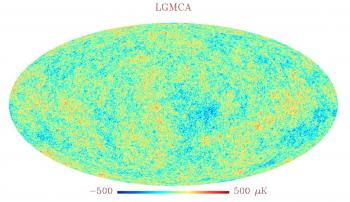 The most detailed map of the first light of the Universe
A new method for the reconstruction of the finest details
Using the latest data from the Planck and WMAP satellites, the laboratory CosmoStat (LCS) of CEA-IRFU just provides the most complete and accurate picture of the diffuse microwave background of the universe considered to be the primary light emitted at the beginning of the expansion. The new map of the diffuse background was built thanks to a new method of separating components called LGMCA particularly well suited to the separation of galactic foregrounds that blur the background image.
More
Planck discovers some amazing galaxy clusters
Clusters and superclusters billions of light-years away
An international team, including scientists from the Astrophysics Department-AIM and the Particle Physics Department of CEA-Irfu, has just used the Planck satellite to discover galaxy clusters with characteristics that were previously unknown. These clusters, which contain up to a thousand galaxies, are the largest structures in the Universe. Many of them are located very far away from us, and we still know relatively little about them.
More 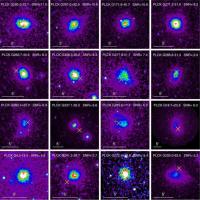 The PLANCK satellite produces its first results
The scientific community had to wait 18 months for the data collected by Planck, the European Space Agency satellite. Now, the first scientific results are in. The first edition of the compact sources catalog (ERCSC, Early Release Compact Sources Catalogue), with several thousand sources detected by Planck, has been published and presented in the context of an international colloquium, held from 11th to 14th January 2011 at the Cité des Sciences et de l'Industrie in La Villette (Paris).
More
Planck: first discovery of a supercluster of galaxies thanks to fossil radiation
National press release 15.09.10
The Planck satellite has just discovered a supercluster of galaxies thanks to its imprint on fossil radiation—witness to the first moments in the life of the Universe. This is a first for the satellite, which also revealed new clusters of galaxies with great precision.      These objects, which contain hundreds or thousands of galaxies, are the largest known structures in the Universe.
More

The European satellite Planck has completed its first All-Sky Survey
High resolution mapping of the first light in the Universe
Following its launch on 14 May 2009, the Planck satellite [1] has been continually observing the celestial vault and has mapped the entire sky since 13 August to obtain the first very high resolution image of the dawn of the universe. The Planck satellite has just finished its first sky coverage. The preliminary images reveal undreamed of details of emissions of gas and dust in our own galaxy.
More