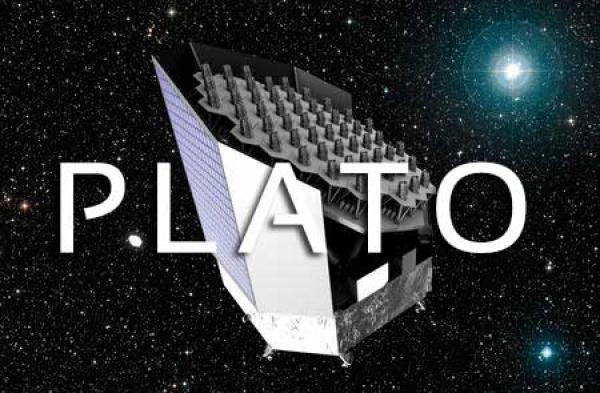 A space observatory developed by ESA for the characterization of exo-planetary systems launched in late 2026.

ESA stellar exo-planet system characterization to be launched at the end of 2026.

PLATO (PLANetary Transits and Oscillations of stars) is a satellite exploring the exo-planetary systems of our galaxy that will be launched at the end of 2026. It is the third medium-class mission of the ESA Cosmic Vision program.

The PLATO satellite will observe two fields of 2150 deg2, each for 2 years. Thus, exoplanets with orbital periods up to about 1 year will be detected. In addition to these long observation phases, there will be a "step&stare" phase, during which several 2100 deg2 fields will be observed for several months each. In total, almost half of the sky will be covered by PLATO observations. Hundreds of thousands of cold dwarf stars (>250,000) will be scanned for planets, among which the brightest (>15,000), with a magnitude (mv) lower than 11 of spectral types F5-K7, will be measured with sufficient accuracy to detect and analyze their oscillation modes. These exoplanets whose host star will be analyzed by seismology, will be able to be characterized in an extremely precise way: in particular, we will know in a reliable way their size, their mass and, especially, their age.

The instrumental concept of PLATO consists of a set of 24 identical, fully dioptric, 120mm pupil cameras, observing the same field of 38.5° diameter at a rate of one image every 25 seconds. Two additional cameras will observe a smaller field, but at a rate of 2.5 seconds, and will be dedicated to the measurement of the brightest stars of the field. Each of these cameras is equipped with its own focal plane, consisting of 4 CCDs of 4510 x 4510 pixels. The images of each of these cameras are processed on board and the light and barycenter curves of all the stars present in the field are measured and transmitted to the ground, independently for each camera, before being averaged.

Several French laboratories of CEA : IRFU and CNRS/INSU : IAS, LESIA, LAM, IRAP, supported by CNES, contribute to various aspects of the mission including: the calibration and thermal tests of the cameras, the on-board software, the electronics of the fast cameras, and the scientific software for the analysis of the stellar and planetary signals

The Department of Astrophysics (DAp)-AIM Laboratory of CEA/IRFU contributes to the instrumental payload of the PLATO mission by developing, in collaboration with the German Space Agency (DLR), the reading electronics of the two so-called "fast" cameras. This equipment contributes to the on-board processing of scientific data that allows the analysis of images around the stars to be studied. In addition, several DAp researchers actively contribute to the development of the data processing chain and to the improvement of the modeling and simulation of the physical mechanisms in stars and planets necessary for the future exploitation of PLATO data.  For example, recent progress has been made to better characterize the internal rotation state of stars, their magnetism, and the presence of a magnetic cycle, the role of the binarity of stars as well as the multiple interactions (tides, magnetism, radiation) between the host star and its planetary cortege.