Developments for future superconducting magnets for the LHC

The LHC (Large Hadron Collider) will achieve its nominal energy of 14 TeV by the end of 2014, and its nominal luminosity of 1034 cm-2s-1 in 2015. Beginning in 2020, for its operation to remain profitable, the LHC will require a major improvement to significantly increase its luminosity. The configuration of the new machine, called the High Luminosity LHC (HL-LHC), will require, among other things, the replacement of the quadrupole triplets in the interaction zones and the triplets in the insertion zones. In parallel with the studies for the HL-LHC, a second program, called the High Energy LHC (HE-LHC), is underway to explore the possibility of future improvements providing for collision energies ranging from 26 to 33 TeV. The basic idea is to replace all of the magnets in the current machine with magnets having a higher magnetic field, of around 20 T. The only superconducting materials that could provide for the achievement of this highly ambitious objective are Nb3Sn and superconductors with high critical temperatures.

An increase of the luminosity factor of the interaction zones from 2 to 3 can be obtained by replacing the final focusing quadrupole triplets of the interaction zones with quadrupoles having a large aperture (120 mm, compared to 70 mm for the current triplets), with a maximum field in the conductor of the same level as that of the LHC arc quadrupoles, approximately 7 T, thereby permitting the use of NbTi. The energy stored and the electromagnetic forces involved are, however, much greater due to the larger aperture. It has therefore been deemed necessary to supplement the design studies of the quadrupoles with the development of two validation models. 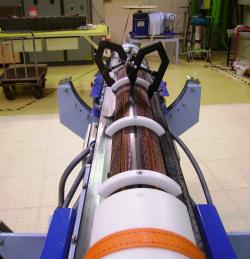 Creation of a coil layer.

Photo of the four internal and external coil layers created at the CEA Saclay site.

In collaboration with CERN, CIEMAT, and RAL (the Rutherford Appleton Laboratory), SACM is in charge of the mechanical validation of the quadrupole design and the construction of four coils for one of the quadrupole models. Each coil is made up two coil layers, manufactured separately and assembled after polymerization by an internal splice. The cables used are the same as those of the LHC arc dipoles; however, new insulation, more permeable to superfluid helium, has been developed to compensate for the higher heat deposits. The coils were delivered to CERN in November 2011. Assembly and collaring was completed at CERN, and the models are currently undergoing testing.

Two-in-one quadrupole with a large aperture

A sub-project of the HL-LHC project, called the Hilumi-LHC, was initiated in 2011. One of its objectives is to improve the magnets in the insertion zones of the LHC. In particular, SACM has been assigned the magnetic and mechanical design of the future quadrupoles of the external triplet, the large-aperture (80 to 100 mm) Q4 quadrupole, which is to replace the current quadrupole having an aperture of only 70 mm. One of the magnetic constraints of the NbTi Q4 quadrupole is a double-aperture, with a spacing of 194 mm, providing for the circulation of two particle beams in opposite directions. The resulting magnetic coupling impacts the quality of the field, especially when the current circulating in the two apertures is different. The currently selected aperture is 90 mm, and the cable is identical to that of the LHC arc quadrupole. Mechanical analyses have provided for validation of the principle for the use of bracing collars for this design, simulating the assembly of the coils, the cooling of the magnet and its operation at 110% of the nominal current.

CEA Saclay and CERN are discussing the possibilities for involvement of SACM in the manufacturing of the future double-aperture Q4 quadrupoles starting in 2013. 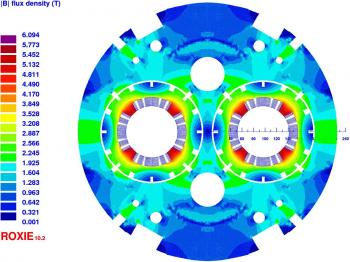 Magnetic design of the quadrupole with a double-aperture of 90 mm, made up of NbTi coils, austenitic steel bracing collars and an iron yoke. The diagram shows the distribution of the magnetic field in the collars and in the yoke when the nominal current is circulating in the two apertures.

On left: mechanical model for validation of the use of the bracing collars for coil assembly. In red: the superconducting cables; in blue: the steel collar. By symmetry, only one octant is modeled. On right: distribution of azimuthal stresses in the coil after assembly of the coils, after cooling of the magnet and during operation of the magnet at 110% of the nominal current.

IRFU R&D activities linked to the use of Nb3Sn as a superconducting material for high-field magnets will result in the creation of a magnet intended for Fresca 2, the new conductor testing station at the CERN facility. This magnet is a an Nb3Sn dipole with a length of 1.5 m and an aperture of 100 mm, and capable of providing a field on the axis of 13 T at 4.2 K, with homogeneity of one percent on 700 mm. Design studies for the dipole began in 2009.

Coil head bending test. The heads are tilted down during the winding operation.

SACM has performed the magnetic and mechanical design studies of the dipole in collaboration with CERN. A block configuration was selected for the coils: each pole is made up of two coils in the shape of a racetrack, each made of two conductor layers with tilted heads providing room for the beam tube. The dipole will be constructed with 1 km of Rutherford type cable made up of 40 strands having a diameter of 1 mm. As part of the partnership with CERN, SACM is responsible for ensuring the supply of superconducting Nb3Sn strands from two suppliers proposing two different technologies: PIT (powder in tube) and RRP (restacked rod process), thereby requiring duplication of the cable behavior analyses from the point of view of superconducting and mechanics . At this time testing is underway to evaluate the dimensional changes of the cables during the thermal reaction that could result in stresses in the conductor and its deterioration if the structure of the coil and equipment are not properly adapted. Different specific tools have been developed for the testing of the coils to provide selection of the best geometry for the layer jump, to prove the feasibility of the heads in the block configuration and to improve their geometry, then to validate “head-down” coils.

The thermal models of the dipole are now available and calculations in stationary conditions and transient conditions in the helium have been performed to analyze the magnet's behavior during cooling, or during a quench. Digital 2D and 3D models have also been developed to validate the magnet's safety system, made up of 4 heaters distributed over the surfaces of the coils and discharge resistors. The detailed analysis of the coils and the structure of the cold mass is now complete, as is that of the coil, reaction and impregnation tools. The supply of these tools is nearly complete, and we have received the components needed for the construction of a full-scale coil prototype, made of copper, the manufacturing of which should begin in February 2013. The manufacturing of the Nb3Sn coils is planned for 2013, and the dipole test is to take place in 2014. 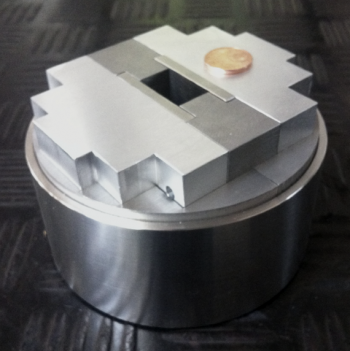 Full-scale model of the dipole insert.

Meeting the induction fields of 20 T is a true challenge attainable only using superconductors with high critical temperatures such as YBaCuO. As part of the European EUCARD program, SACM is responsible for the construction of a dipole insert made of YBaCuO, generating a magnetic field of 6 T at 4.2 K in the 13-T Fresca 2 dipole. The challenges are related to both mechanical aspects, maintaining high forces, and protection aspects, preventing destruction of the magnet in the event of a quench. The magnetic and mechanical designs of this magnet are complete. It will comprise 3 double-layer coils in the shape of a racetrack, assembled around a central iron pole held in place by a stainless steel clamp and a stainless steel external cylinder. The insert components are currently being manufactured. A prototype made up of a single winding layer will soon be built in order to measure the current density transported by the superconducting ribbon as a function of the orientation of the external magnetic field. The insert itself will be wound and assembled during 2013. 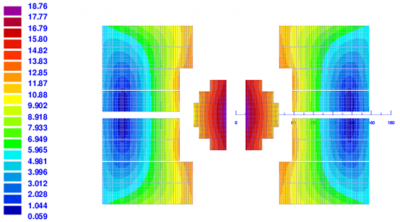 Magnetic field of the insert in the Fresca 2 magnet.