ATLAS giants on their way to CERN! 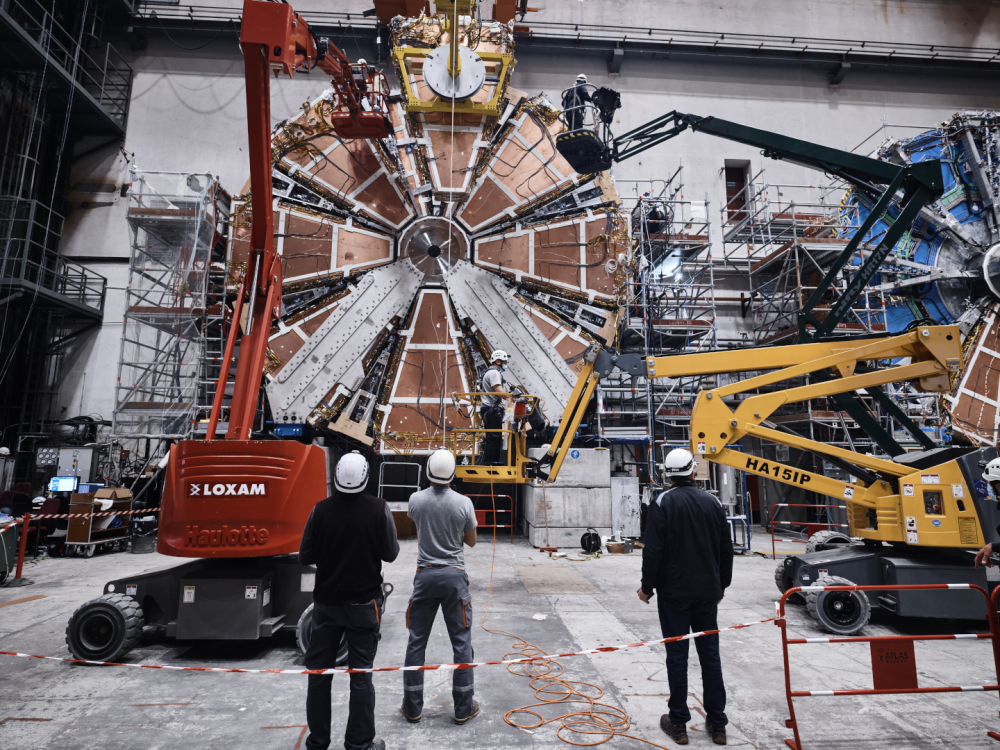 As part of the luminosity increase of the Large Hadron Collider (LHC), the first phase of the ATLAS experiment upgrade is coming to an end, before a restart planned for early 2022. To meet the requirements of physics in a highly radiative environment with a high particle flux, the two internal wheels of the muon spectrometer will be replaced by new devices: the New Small Wheels (NSW).
After several years of R&D and production, IRFU has just sent the last of the 32 detection modules that will be integrated into the NSW at CERN. This corresponds to the assembly of about 400 m2 of gas detectors based on Micromegas technology: a record!

The New Small Wheels of ATLAS

A team of physicists, engineers and technicians from the IRFU is completing the manufacture of the 32 gaseous Micromegas detectors that make up the new small wheels (NSW) of the ATLAS detector, covering a total surface area of 400 m2. The NSWs are part of a programme to upgrade the ATLAS detector in preparation for the LHC Run3, which is due to start in 2022, and then for the high-luminosity phase, known as HL-LHC, during which the collision rate will be about five times higher than in Run2 (2015-2018).
Micromegas technology was selected by the ATLAS experiment in 2012 to equip the NSWs of the muon spectrometer, in association with another type of detector, the small Thin Gap Chambers (sTGC). Weighing more than 100 tonnes each and dedicated to the reconstruction of muon tracks, the NSWs will meet the requirements of the experiment during the HL-LHC phase.

A split view of the ATLAS experiment. The area circled in yellow represents the position of one of the future NSWs. There will be one at the front and one at the back of the experiment. Each wheel is ~9.5 m in diameter. The manufacture of the 1200 m2 of Micromegas detectors needed for the two new wheels has been entrusted to four European consortium of laboratories, including Saclay for France, which is responsible for the manufacture of all the LM1 modules, i.e. 400 m2 of Micromegas detectors.

The NSWs will therefore have to operate in a high-radiation environment (radiation-resistant detectors are needed) and high particle flux (detectors that can withstand high occupancy rates are needed) while allowing the reconstruction of muon tracks with a local accuracy of 50-70 μm, the measurement of their momentum with an accuracy of 15% at 1 TeV, as well as some triggering information at each proton collision, i.e. every 25 ns.
This large-scale project required the work of 25 people at IRFU for 7 years and the resolution of numerous technological challenges. IRFU had to produce and test 32 multilayer detectors of trapezoidal shape, of 12 m2 each, for a surface of approximately 400 m2 on the 1200 m2 of the 2 wheels: a record for the Micromegas technology!
These new detectors built by IRFU are already installed, or are being integrated at CERN, on two large mechanical wheels 9.5 metres in diameter. Three other laboratory groups/consortia have also produced similar detector assemblies to pave the necessary surface for the two wheels: they are based in Germany, Italy, Greece and Russia. The two wheels are expected to be installed in the ATLAS cavern 100 m underground by the end of 2021.

Genesis of a CEA invention

Invented at the end of the 90s by IRFU and CERN, and more recently declined in resistive mode by these same institutes, the gaseous Micromegas detectors have already been deployed in several experiments but never on such a scale. As early as the end of the 2000s, IRFU had proposed to improve the ATLAS experiment with a paving of Micromegas detectors with a resistive anode, because this new technology was particularly promising for being able to operate at very high particle fluxes, of the order of 15 kHz/cm2!

In addition to being a first in terms of the surface area covered, the construction of the NSW was also a feat in terms of the mechanical precision with which these detectors were assembled. A very specific construction technique had to be deployed in order to guarantee an internal mechanical understanding of these assemblies to within a hair's breadth, i.e. better than 40 microns for the 12 m2 detection planes! The IRFU group also ensured the mechanical calibration of the precision elements in the three other construction consortia, thanks to its extensive experience in the field of micromechanics (see the alignment of the ATLAS muon chambers).
Among the many difficulties encountered, one was particularly difficult to overcome, and is still being studied at IRFU today. Indeed, the Micromegas detectors of the NSW are composed of an assembly of very large printed circuits produced by two industrial partners in France and in Italy, and going up to ~1 m2. These circuits are then equipped with resistive anodes provided by the collaboration via several institutes located in Japan. However, for some consortia, including Saclay, this part of the equipment proved to have a resistivity at the lower limit of what was expected, thus causing operating difficulties. In order to recover standard operating parameters, it was necessary to make the beginning of these resistive tracks passive over a few centimetres (by adding a thin insulating layer). The inert zone thus created represents only 2% of the surface, which will have little impact on the operation of the trajectograph.
The printed circuits that support the electrodes are assembled into composite panels during several hundred operations in a specific clean room, partly funded by the Ile-de-France region. They are then integrated into the modules, which are made up of 5 panels (2 double-sided reading panels and 3 drift panels).

Photo of the interior of the clean room where the detectors were assembled. The tools used to manufacture the composite panels can be seen, and in the background, the granite tables equipped with metrology equipment and the module assembly area. The modules consist of five panels, two for reading and three for drifting (right). This clean room was mandatory to avoid dust deposition during the detector assembly and its construction was made possible thanks to a SESAME funding from the Ile de France region.

Measurement of reconstruction performance on a "cosmic bench

After checking the electrical behaviour of the modules and verifying their metrology, these detectors are finally tested on a cosmic bench to validate their performance. This bench operates thanks to the flow of atmospheric muons that constantly reach the ground. These particles easily pass through great thicknesses of material with little attenuation and 'light up' the detectors to be tested as they pass through, thus enabling their operation to be verified. Once validated, these detectors are then sent to CERN to be integrated into the wheels. 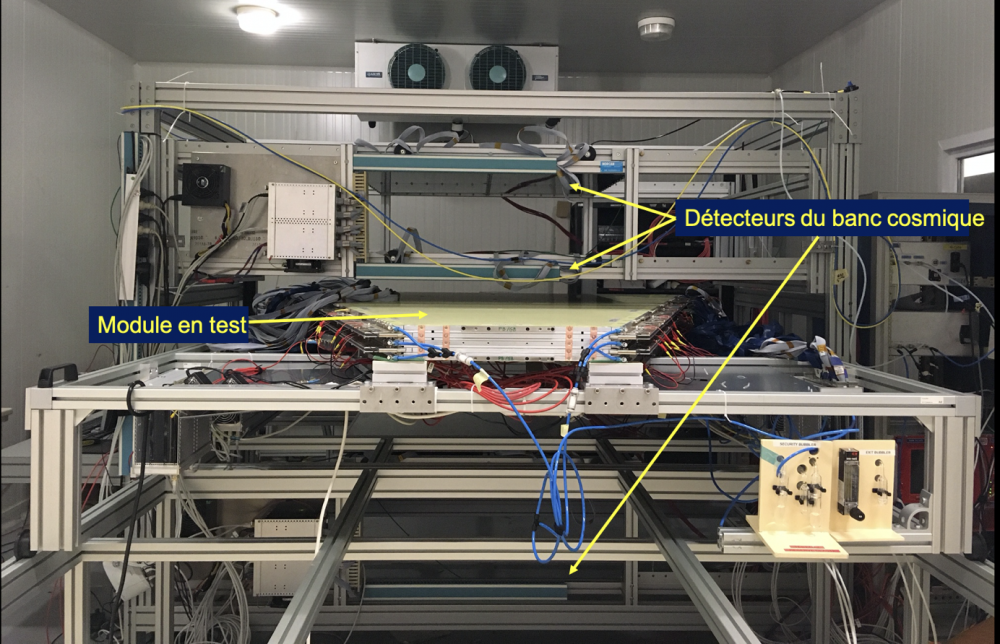 Cosmic bench used for the final validation of the detectors before they are sent to CERN. The module under test is placed on the support structure. Three reference planes are used to characterise the muon impact point in the detector under test: two are located above (marked with a light blue line), and one below. Also shown on the left is part of the readout electronics, and on the right is the system for controlling the gas mixture flowing through the detector.

This participation in the updating of the ATLAS detector enabled the IRFU to develop an original technique for the precise positioning of printed circuits in relation to each other, as well as new skills in the integration of gaseous detectors, some of the components of which can be produced beforehand by industry. In order to carry out this production, it was also necessary to develop numerous tools as well as their servo-control and control, for operations such as washing, drying or even high-voltage conditioning of the modules.
For several months now, IRFU has also been involved in the integration of these detectors at CERN. In addition to being responsible for receiving the detectors and testing them under irradiation, IRFU is in charge of the technical mechanical coordination of the NSWs. The integration of the two NSWs into the ATLAS experiment should last until the end of 2021. Once the detectors are installed, several more months will be needed to test them, in order to be ready for the LHC's restart in 2022.