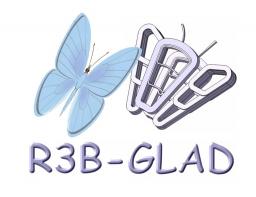 Within the detection set-up of the future R3B experimental hall, the large aperture superconducting spectrometer GLAD (GSI Large Acceptance Dipole) will play a central role. This magnet is being designed in CEA-Saclay, DAPNIA, and will be built there with the help of subcontracting industrial companies. GLAD will be used by all the experiments which will be performed by the R3B collaboration, whether these experiments will be aiming at studying the structure of exotic nuclei or the reaction mechanisms (e.g. in spallation reactions).
The preliminary design study of the GLAD spectrometer was performed in 2001 and 2002 and was funded within the 5th framework programme of the European Union in order to cope with the ambitious specifications of such a magnet (large aperture, combined with a rather high field integral of roughly 5 T.m and a very low fringe field of 20 mT and below at 30 cm of the magnet entrance). An efficient separation of the tracks of the heavy fragments and of the protons is also ensured with the high bending power of the magnet.

Goals of the project:

GLAD is being designed in order to reach four main goals:

-         A bending power of 4.8 T.m which permits to bend to 18 deg fragments of 132Sn50+ whose kinetic energy is 1 GeV per nucleon
-         A large angular aperture, both horizontal and vertical, for light charged particles, nuclear fragments as well as for neutrons whose trajectories are not modified by the magnetic field,
-         A large momentum acceptance to allow for the simultaneous detection of protons and heavy beam residues of the same kinetic energy per nucleon produced at the target point in front of GLAD
-         Insure a low fringe field, with emphasis on the fringe field in the target region (entrance of the magnet) in order to make possible the use of detectors around the target which are sensitive to the presence of magnetic fields such as photomultipliers
The characteristics of GLAD will make feasible experiments which require the coincidence measurement of light particles and heavy fragments which have a low kinetic energy in the centre-of-mass frame of the projectile. Such particles and fragments are essentially particles from the de-excitation of the projectiles which have undergone a nuclear reaction in the target. This magnet is therefore very well suited for the study of spallation in coincidence and inverse kinematics as well as for the study of the fission of nuclei from Coulomb excitation. Such a coincidence measurement will allow for the reconstruction of the excited states of the projectile during the nuclear reaction in the target. This will give therefore access to information on the nuclear structure of the projectile.

The GLAD magnet will be used in the R3B hall of the FAIR facility in GSI, Darmstadt, Germany.

The funding of the construction of the R3B-GLAD dipole magnet is provided by the European Union within the 6th framework programme, GSI and the DAPNIA. The DAPNIA project team on this magnet is fully in charge of its design and of its construction.

The R3B international collaboration gathers around 150 physicists from 50 different research institutes and universities around the world (Europe, India, China, Northern America and Russia).
The R3B-GLAD project aims at designing and building in less than 5 years a magnet whose weight will be approximately 50 tons, width 7 m, height 4 m and length 3.5 m. The energy stored in the 4.5 tons of superconducting niobium-titanium (NbTi) cable will be roughly 24 MJ.
The specifications of the experimental parameters for the dipole magnet (bending power, fringe field, etc) have been given by the R3B collaboration. The DAPNIA is in charge of the design, of the construction and of the tests of the magnet in Saclay. After these tests, GLAD will be shipped to GSI in Germany for installation, testing and experiments. The FAIR facility will have to provide, for a proper functioning of the magnet, all the cryogenics (liquid helium and nitrogen) as well as the power supply and the entire local infrastructure.
The collaboration of GSI / FAIR staff members is foreseen as early in the construction of the magnet as the dipole integration in the cryostat. They will also take part in the tests in Saclay.
o       The SACM is the division in charge of project, from the conceptual design to the construction and the tests, including in particular the detailed design study with the original magnet design, the superconducting cable which is the base of the magnetic coils, the cryogenics and the magnet cooling working on the thermo siphon concept and the entire magnet protection scheme,
-         SIS
o       The SIS is in charge of the mechanical design of the magnet and the cold mass, whose major difficulty of construction is to ensure the mechanical stability of the whole magnet and compensate for the efforts on the coils provided by the magnetic field, of the order of 400 tons/m,
-         SPhN
o       The SPhN who ensures the scientific responsibility of the project provides the link between the R3B collaboration and the project team and helps the technical staff to translate into technical parameters the parameters provided by the physics to be performed within R3B and with the GLAD magnet

The DAPNIA in CEA-Saclay is the only research institution working on the realisation of the GLAD magnet. 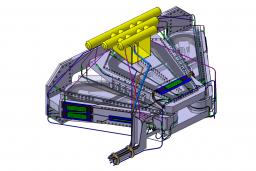 View of the cold mass (cryostat + magnetic coils) of R3B-GLAD 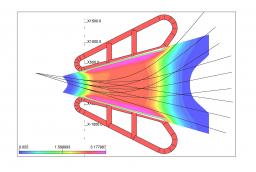 Specificities of the project & technical description

Duration: approximately 5 years
Dimensions: Length = 3.5 m; Width = 7 m; Height = 4 m
Total weight = 50 tons; Cold mass weight = 20 tons
Superconducting cable: NbTi, Length = 16 km, weight = 4.5 tons
Current density < 80 A/mm2
Current in the coils = 3700 A
Magnetic strength on the cable = 300 to 400 tons/m
Stored energy = 24 MJ
Field integral = 4.8 T.m
The protection system of the magnet is relying on an active detection of the transitions of the cable to the resistive phase followed by a discharge of the magnet on an external resistor. The coils are pre-constrained in an aluminium alloy casing in order to compensate for the relatively high efforts on the coils provided by the magnetic field (300 to 400 tons per meter).
The magnet cooling is provided by conduction of heat through the winding to a two-phase helium flow working in thermo siphon.
The cryostat, the helium phase separator and the thermal screens will be placed inside a conical and elliptical vacuum chamber (~ 7 m x 4 m at the exit)
In July 2001, the technical design report was validated by an international review committee of experts. In 2003, the proposal for a CNI contract including the construction of GLAD was given to the European Commission for a funding within the 6th framework programme while the final design studies went on. The funding was accepted at the end of 2005 and the project could start officially in the beginning of 2006.
The SACM is in charge of the management of this project which necessitates a contribution of the SIS. The SPhN is in charge of the scientific management of the project and makes the link between the R3B collaboration and the project team.
Based on the innovative concept of active shielding, the R3B-GLAD magnet is made of four superconducting coils (“Tigra-Trace” design: TIlted GRAded Trapezoidal RACEtrack). The two main coils are shaped in racetrack widening from the entrance to the exit of the magnet and are tilted vertically. The side coils, which contribute both to the main dipole field and to the magnetic shielding, are turned horizontally with respect to the magnetic symmetry axis. Such geometry allows for reducing the useful magnetic volume by putting the coils as close as possible from the particle and fragment track envelops, and, therefore, of the stored energy in the magnet which is an essential parameter on the price of such a device. The necessary angular aperture is hence provided while, at the same time, keeping a low fringe field at the entrance of the magnet, in the target region.
The number of turns in the main coils is gradually increasing from the entrance to the exit. This results in a rather flat plateau for the magnetic field inside the magnetic volume at 2.7 T while keeping the field value on the surface of the coil below 6.5 T. The side coils have also the same gradation in the number of turns and have been shaped in order to decrease rapidly the field outside the magnet (on the sides) and to provide a low fringe field in the target region which follows the specifications from the physics and the experiments (below 20 mT).
The apparent current density in the cable is kept below 80 A/mm2. Such a design gives a rather compact magnet with a stored energy of approximately 24 MJ.
The active shielding concept allows building a fully superconducting magnet which provides a full linearity between the current in the coils and the field map of the magnet while keeping a rather low fringe field. 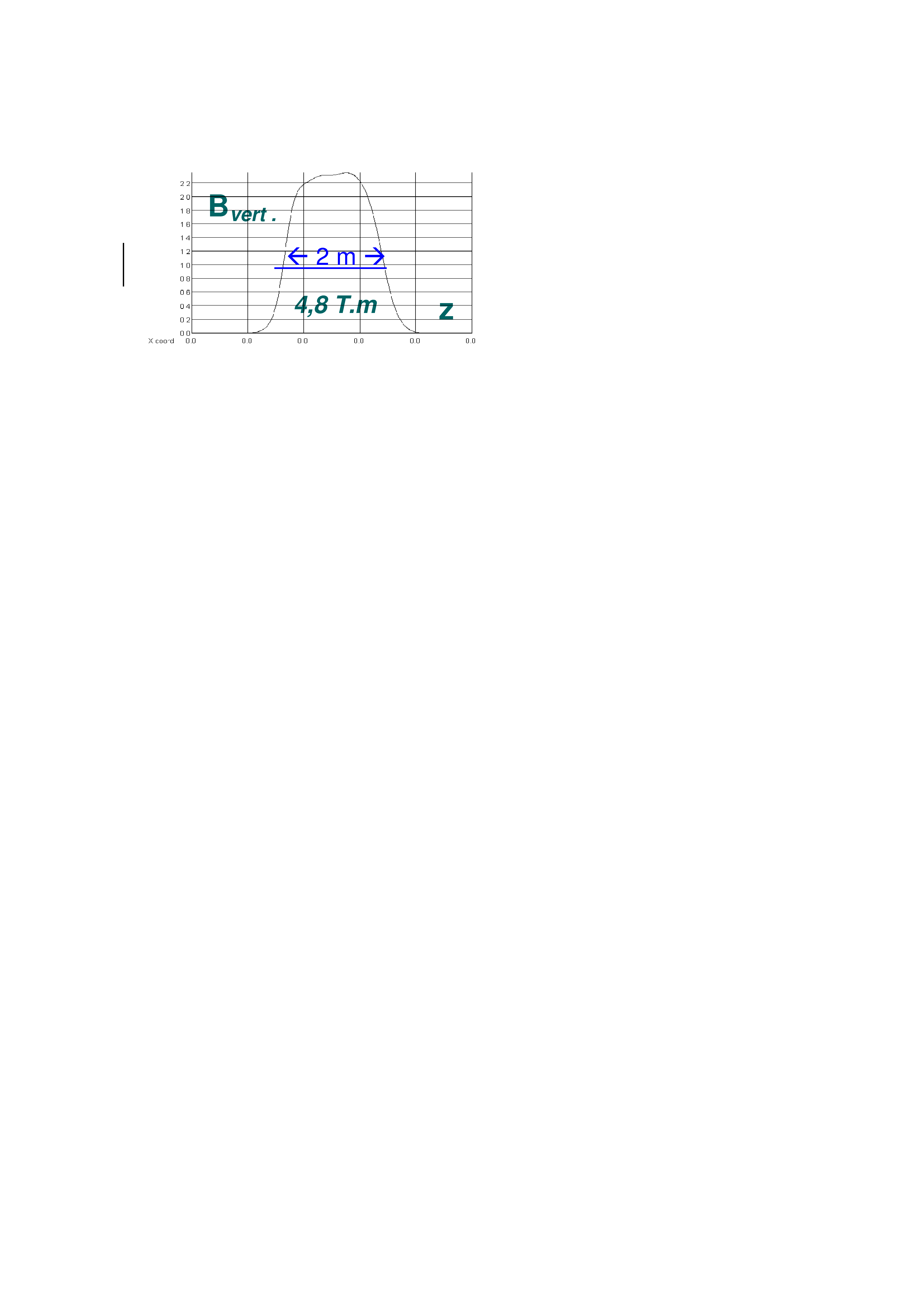