The Artemis camera has been successfully installed on APEX telescope during the summer 2013. The new camera has already delivered a spectacularly detailed view of the Cat’s Paw Nebula. 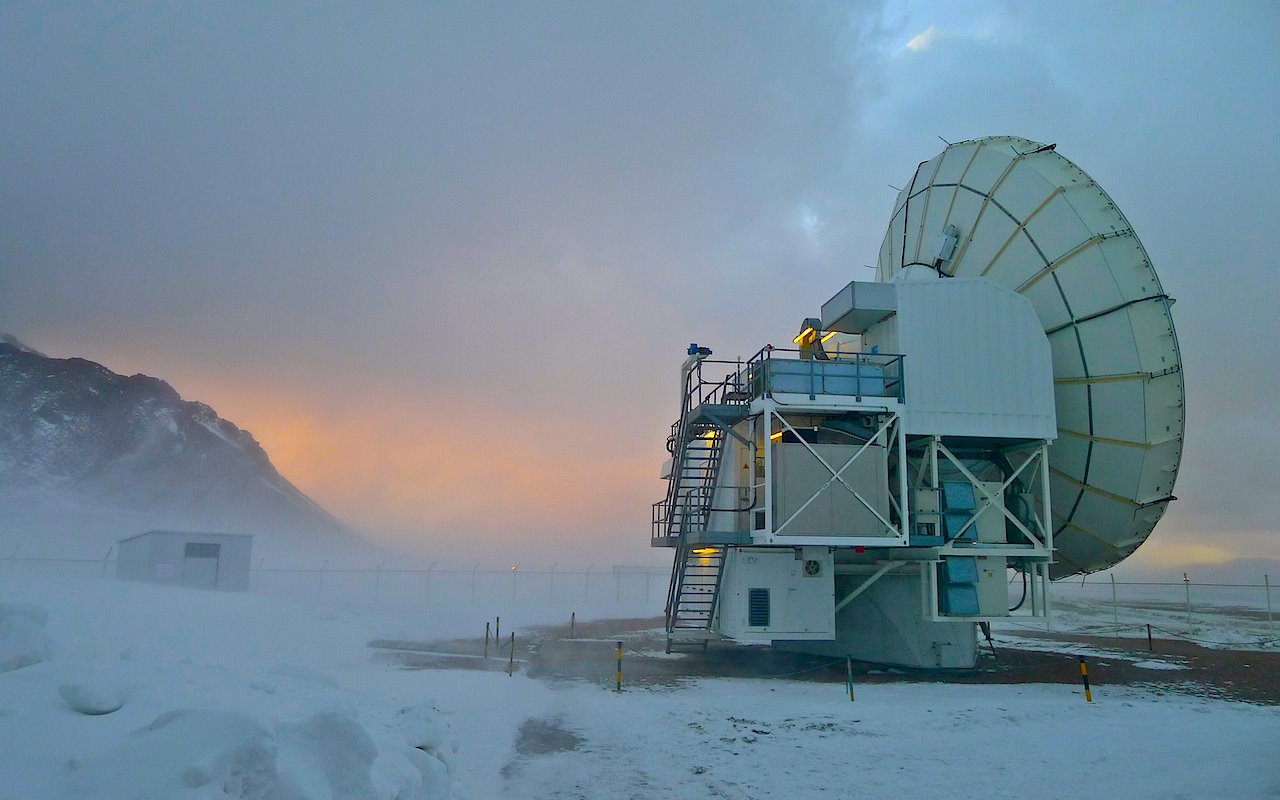 The commissioning team that installed ArTeMIS had to battle against extreme weather conditions to complete the task. Very heavy snow on the Chajnantor Plateau had almost buried the APEX control building. With help from staff at the ALMA Operations Support Facility and APEX, the team transported the ArTeMiS boxes to the telescope via a makeshift road, avoiding the snowdrifts, and were able to install the instrument, manoeuvre the cryostat into position, and attach it in its final location.

Following the commissioning done at a wavelength of 350 microns, several scientific projects have already been observed. One of these targets was the star formation region NGC 6334, (the Cat’s Paw Nebula), in the southern constellation of Scorpius (The Scorpion). This new ArTeMiS image is significantly better than earlier APEX images of the same region.

The testing of ArTeMiS has been completed and the camera will now return to Saclay in France in order to install additional detectors in the instrument. The whole team is already very excited by the results from these initial observations, which are a wonderful reward for many years of hard work and could not have been achieved without the help and support of the APEX staff.

CEA-Irfu has received an ANR Grant (2006-2008) to initiate the Artemis project. All subsystems (cryogenics, optics, mechanics, control, electronics, software) have been designed, made and tested by CEA-Irfu and CEA/Inac.

The detectors used in the Artemis camera  are bolometers designed and built by the CEA-LETI Institute in Grenoble. 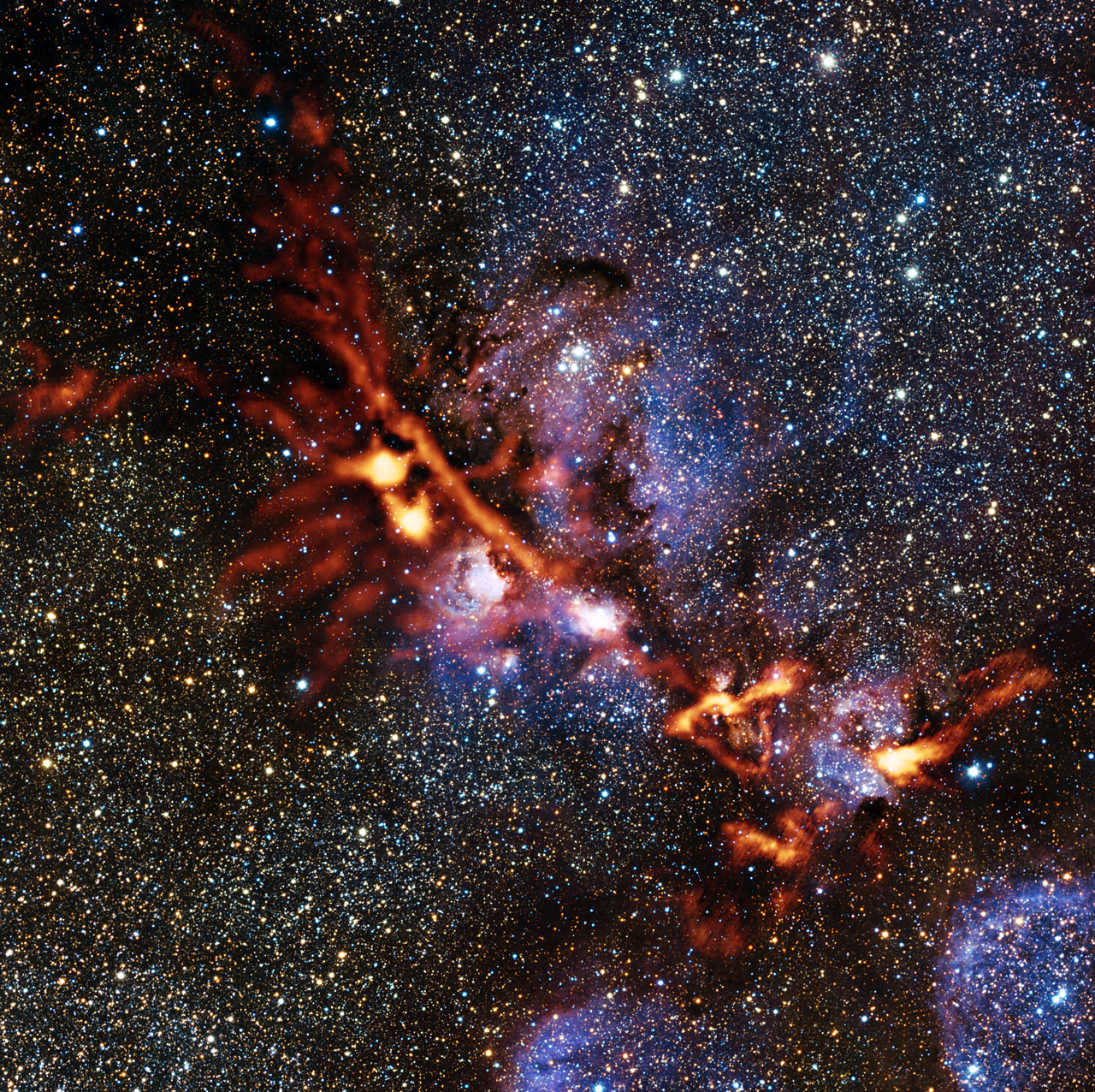 First image of NGC3576 at 450 microns, a Southern hemisphere region of high-mass star formation that is not observable with Northern telescopes.

The first wide-field maps were obtained with the prototype camera of ArTéMiS, a wide-field new generation bolometer camera, on APEX telescope on the Chajnantor plateau in Chile.  These astronomical observations were carried out thanks to three ESO and Swedish time project on APEX. The Saclay astronomers have imaged the thermal emission of cold dust grains that are embedded in star-forming cores and in proto-planetary/deris. Among the imaged regions, NGC3576, G327.3-0.6, S255, NGC2264, high-mass star-forming regions, and HD97048 et Beta-Pictoris, a protoplanetary and a debris disks were mapped and detected. Figure in attachment present our large-scale map of NGC3576 at 450 microns.

The ARTEMIS project aims to develop novel technologies for large arrays of detectors in the submillimetre part of the electromagnetic spectrum. These large array developments will mainly be beneficial for submillimetre astronomy and its needs in the coming years. The study of embedded star formation at all scales in the Universe will particularly benefit with two highlight projects on:

Astronomical observations at submillimetre wavelengths are limited either by the angular resolution of the telescope or by the sensitivity and the field of view of the detector array. New generation of radio telescopes, such as the APEX telescope on the high altitude plateau of Atacama in Chile, can overcome these limitations if they are equipped with large detector arrays made of thousands of sensitive bolometer pixels.

Left: APEX telescope at 5100 m on Llano Chajnantor in Chile. Right: KOSMA telescope at 3100 m on the Gornergrat in the Swiss Alps.

A prototype of ArTéMiS has successfully been tested on the KOSMA telescope from University of Cologne and on APEX (MPIfR/Bonn, Onsala Space Observatory/Sweden, ESO), a 12-m ALMA type telescope on Llano Chajnantor in Chile. First Astronomical observations at 450 µm with p-ArTéMiS/APEX in the continuum were carried out in November 2007 under ESO and Swedish observing time.

The ArTéMiS project is funded by the French Research Agengy (ANR), the CEA, and partly by two national programmes, PNPS and PCMI. ArTéMiS is CEA led-collaboration with IAS/CNRS, IAP/CNRS and CRTBT/CNRS. Our international partners are Onsala Space Observatory/Sweden, ESO, and KOSMA/University of Cologne. Contributions from CEA/DRT/Leti, CEA/DSM/SBT and CEA/DSM/SIS are also acknowledged.

March 2007: First lights on the APEX telescope and p-ArTéMiS as PI instrument on APEX.