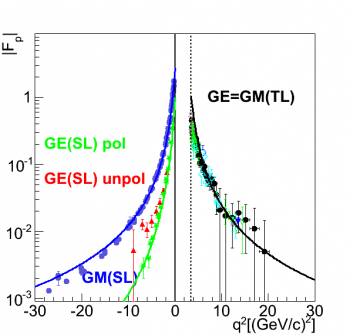 Hadron electromagnetic form factors parametrize the internal structure of hadrons, the dynamical distribution of magnetization and charge created by the inner constituents.

They are considered fundamental quantities as they are a privileged background for interplay between theory and experiment. Elastic form factors are accessed experimentally through the measurement of differential cross section and polarization observables in elementary reactions such as electron-proton elastic scattering and the crossed reactions: the electron positron annihilation into proton and antiproton (and the time reverse reaction).  They parametrize the hadron electromagnetic current. Any hadron model, after static properties as masses and magnetic moments, must describe electromagnetic form factors.

A particle with spin S, assuming P and T invariance, is described by 2S+1 form factors. Protons an neutrons have two form factors, electric and magnetic.

Since 1961 when R. Hofstadter got the Nobel prize "for his pioneering studies of electron scattering in atomic nuclei and for his thereby achieved discoveries concerning the structure of the nucleons" based on the first measurements of elastic proton form factors at SLAC, this field of research inspired thousands of papers, in theory and experiment.

New interest since the new millennium raised due to the possibility to apply the polarization method. Such method, suggested by the Kharkov school (A.I. Akhiezer and M. P. Rekalo) in the end of the sixties, could be applied only recently, when highly polarized and intense electron beams became available at Jefferson Laboratory (JLab). Not only the collected data are more precise than those obtained through the unpolarized cross section (the Rosenbluth method) but they gave the surprising results that the electric and magnetic distributions in the proton are different, contrary to what previously assumed. Moreover the extrapolation of the obtained results indicates that the electric form factor of the proton could vanish and even become negative… This needs confirmation from the future experiments planned at JLab, after the 11 GeV upgrade.

The polarization method requires the measurement of the polarization of the scattered proton. The polarimetry in the GeV region was developed at Saturne National Laboratory, and after his closing, at the Joint Institute of Nuclear Research in Dubna (the ALPOM experiment).

We contribute to several aspects of this research.

We promote the idea of global representation of form factors in the the space (scattering) and time-(annihilation) like region of transferred momenta, suggesting a coherent modelization of annihilation and scattering reactions.

We discovered specific regular oscillations in time-like form factors and we suggested that they are related to the first instants of matter creation from quantum vacuum.

We are measuring the analyzing powers for polarized proton and neutron beams in the GeV energy region, optimizing polarimetry at the highest achievable momentum (the ALPOM2 experiment).

We proposed form factor measurements at the future facility PANDA at FAIR, where antiproton beams will be available and calculated the cross sections for the signal and the background processes, including the unphysical region.

We calculate radiative corrections for a number of electromagnetic processes, and analyze model independent properties of the underlying reaction mechanism, the exchange of a virtual photon. 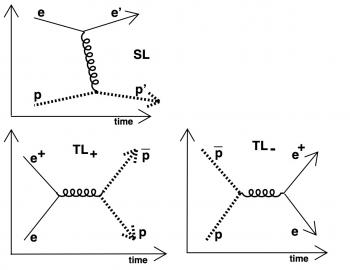