The heavier element ever found on Earth is Uranium-238 (half-life of the order of 5 109 years). For 60 years, till 2005, nearly 20 elements heavier than U were synthesized in laboratory, with shorter life periods. In 2003, the last element, whose existence was confirmed, was the Z=112 isotope, produced at GSI (Darmstadt). In the years 2002-2017, intensive searches have been pursued at the FLNR (Flerov Laboratory for Nuclear Research)laboratory of Dubna (Russia) and at RIKEN (Japan), leading to the findings of new elements. With the confirmation of the measurements and of the discovery of the new elements, a name was adopted for them officially by the IUPAC (International Union of Pure and Applied Chemistry) organization. For instance, the Nihonium for the Z = 113 produced at RIKEN by the Japanese team led by Dr. Morita. They used the 209Bi(70Zn,n)278Nh reaction, the identification of Z = 113 was confirmed in the years 2012-2015. The Z = 118, Oganesson (symbol Og) was synthetized in 2002 at the FLNR then confirmed in 2015 (the element was called from I. Oganessian, head of FLNR). The  Z=118 was produced via the reaction 249Cf(48Ca,3n)294Og of the 48Ca beam on a 249Cf target. The target was provided by the LLNL (Lawrence Livermore National Laboratory, USA). The FLNR is the only laboratory in the world which can deliver a beam of 48Ca intense enough for the superheavy element productions.

How many elements can still be produced? Depending on the theories, an increase of stability may be found in the vicinity of the Z=120 region of the nuclear chart. The exact location depends upon the models. The area around  Z=114 protons and N=184 neutrons was predicted as a possible island of stability. The experiments searching for the formation of compound nuclei with charge Z~114 have been performed, as steps towards this island.

All the synthesized superheavy nuclei are unstable, with lifetimes from a few ms to several 106 years. The signature of a new superheavy element is obtained via the observation of alpha decay chain, from this unknown nucleus to a  daughter nucleus well identified at the end of the decay.

See the pages on the superheavy experiments, realized between 2000 and 2008 at GANIL using the FULIS rotating target developed by Irfu. The FINOL experiment showed, for the first time, the formation of a compound nucleus Z=120

See the page on the formation of superheavy nuclei, using two technics: the fission time measurements, and the transfermium spectroscopy. 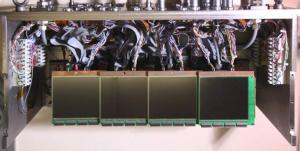 MUSETT, a Wall of Silicon detectors for the Study of Transfermiums via Tagging technique.

The main objectives are to measure the spectroscopy of the new heavy and superheavy exotic nuclei  (Z >100). They have been out of reach with the standard methods, up to now. They are characterized by very small production cross sections. To study them, specific devices have been built. The DPhN team has conceived the detection project MUSETT, Mur de Silicium pour l'Etude des Transfermium par Tagging, Wall of Silicon detectors for the Study of Transfermiums via Tagging technique. This innovative wall of detectors was developed at Irfu and funded with an ANR grant (agence nationale de la recherche, National Research Agency). MUSETT was combined with the VAMOS spectrometer at GANIL to carry out experiments of prompt spectroscopy using the tagging technique.

The next generation machine at GANIL, SPIRAL2 will deliver stable beams of heavy ions with higher intensities, from Helium to Calcium, in a first step, then Uranium beams. The intensities will reach order of 1pµA to 1pmA. With these beams, GANIL will open new possibilities for the synthesis of heavy and superheavy nuclei and for the spectroscopic studies.

The detection project for these studies is the Super Separator Spectrometer S3. The DPhN team is co-spokeperson of the S3 project (funded with an Equipex grant), and IRFU teams are deeply involved in the concept design and development of the detection systems, as well as in the physics program proposals (spokepersons of 5 Letters of intent). With the very high intense beams delivered by the LINAG accelerator of SPIRAL2, new horizons will be opened for the studies of very rare isotopes and for the synthesis of superheavy nuclei at the limit of the nuclear binding. 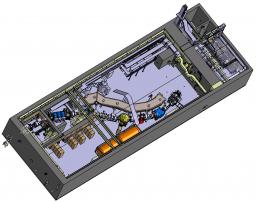 The project for the experimental area of the Super Separator Spectrometer S3 at GANIL.